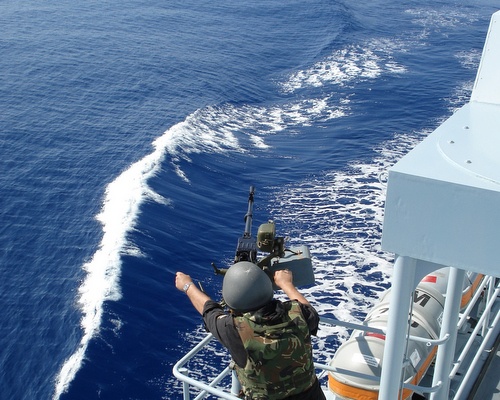 The Bulgarian Navy might add 2 second-hand Dutch ships to the four used vessels it already got from Belgium. Photo by BGNES

The Bulgarian Navy will most likely acquire two second-hand destroyers from the Netherlands in 2014.

According to the Commander-in-Chief of the Bulgarian Navy, Rear Admiral Plamen Manushev, Bulgaria’s Defense Ministry is considering buying two more second-hand vessels for the navy, most likely minesweepers, and the Netherlands will be retiring such ships which means they can be purchased cheaper.

However, the deal might come through only after 2014 as the financially strained Bulgarian Defense Ministry would not consider purchases for the naval forces earlier.

On Wednesday, Rear Admiral Manushev welcomed in the Bulgarian Navy headquarters in Varna Divisional Admiral Jean-Paul Robyns, who came for the signing of an agreement for the technical maintenance of the four used vessels that Bulgaria purchased from Belgium over the past couple of years – the three frigates “Drazki” (“Bold”), “Verni” (“Faithful”), “Gordi” (“Proud”) and the minesweeper “Tsibar”.

Divisional Admiral Jean-Paul Robyns stated in Varna that the Naval Division of the Belgian Armed Forces will continue to provide assistance to the Bulgarian Navy for the operation of the second-hand ships.

A major issue with the use of the four ships has to do with the lack of transformers for the voltage of the electricity that they receive when they are on anchor. Thus, the vessels have to use their diesel-powered electricity generators the entire time, even when they are at port, wasting tonnes of diesel each month.

In a recent interview for the 24 Chasa Daily Bulgaria’s Defense Minister Anyu Angelov said his institution could not afford to purchase the transformers at the current prices in Bulgaria, and said it planned to seek providers from the entire EU.

“I don’t want to blame my predecessors but I will say that the Belgians offered them such transformers at a twice cheaper prices but they were refused,” Angelov said.

The major arms deal that the Bulgarian government plans to focus on in the coming years will be the procurement of fighter jets.