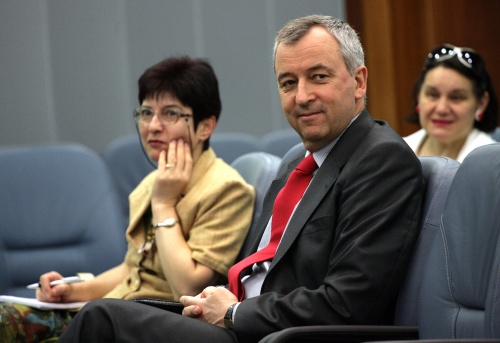 Bulgarian politicians gathered at a conference Monday to share their reflections on the country's first democratic elections after the fall of communism in 1989.

The conference, held at Sofia University, marked 20 years from the elections, bringing together key figures in the crucial political events in Bulgaria during the early 90s.

Zhelyu Zhelev, then leader of the Union of Democratic Forces (SDS), Bulgaria's main rightist opposition party in the 90s, later first elected President of the Republic, commented on the outcome of the elections, lamenting that the Union should have staged a less “negative” campaign and should have put more efforts in fleshing out real political alternatives.

The Union of Democratic Forces lost the elections to the Bulgarian Socialist Party (BSP) – the freshly renamed Communist Party which had ruled Bulgaria in the previous decades. SDS got 145 out of 400 deputies in the Grand National Assembly, while BSP got 210 MPs – more than all opposition parties taken together.

President Zhelev characterized Bulgaria's first free elections as a “grand historic event that not only wakened and shook the country, but was also an important stage in Bulgaria's 'Velvet Revolution'.”

“Notwithstanding that the democratic forces failed to win the elections, public discontent and the will to change poured out in various forms of protest,” added he.

Monday's discussion also provoked conflicts of historical interpretation, with Zhelyu Zhelev characterizing the events of 1989-1990 as a “coup” or “take-over” of power, and representatives from Bulgaria's Socialists dissenting.

According to BSP's Georgi Pirinski, current deputy speaker of the Bulgarian Parliament, said that the “coup” interpretation is one of two strong views, the other being that the events are best understood as concerted efforts on the part of the Socialists to transform the political order in the country.

Pirinski stated that although the “take-over” view is the prevailing one today, it tends to conceal the truth about those historic events.

Other actors from the events in the early 90s recalled aspects of the processes and reflected on topics such as the consolidation of the rightist political parties, the role of the Movement for Rights and Freedoms, which vowed to defend the interests of ethnic Turks in Bulgaria, and the readiness of the country to effect a transition.