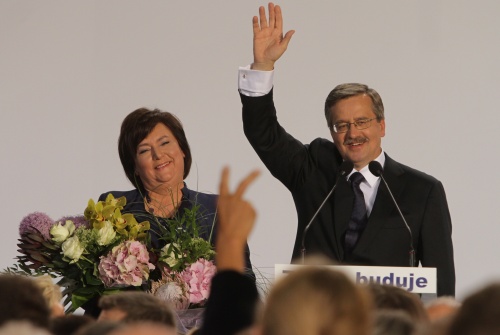 The 58-year-old historian, aristocrat and former anti-Communist activist is set to be inaugurated in mid-August to become Poland's fifth head of state since the fall of Communism in 1989.

The outcome is a victory for the younger, urban class of Poles in northern and western Poland, who have prospered over the past 20 years and who see the country's future in terms of further EU integration, market liberalisation and reconciliation with Germany and Russia.

Mr Komorowski backs the centre-right Civic Platform's plan to cut Poland's budget deficit to the EU limit of 3 percent of GDP by 2012, to press ahead with further privatisation and with a measured pace of entry into the eurozone.

The softly-spoken politician has also indicated he will follow Prime Minister Donald Tusk on foreign policy, such as pulling Polish soldiers out of Afghanistan, heralding a new period of stability in Polish politics following three years of constant head-butting between Mr Tusk and the late president Lech Kaczynski, Mr Jaroslaw Kaczynski's twin brother, including at EU summits.

"Differences are normal. But I get the feeling that the pain of our division is too great. I am appealing for us to do everything we can to build not divisions, but a feeling of unity," Mr Komorowski said on Sunday, recognising the fact that almost half the country backed Jaroslaw Kaczynski despite his victory.

For his part, Mr Kaczynski congratulated Mr Komorowski, but noted that his own strong support bodes well for upcoming local elections and for the next general elections, due in autumn 2011, in the middle of Poland's chairmanship of the rotating EU presidency.

"There are so many [of our supporters], we can say, Poland has changed. Our task is to use this strength," he said. "To be conquered but not to yield - that is true victory. To conquer and to rest on one's laurels - that's a disaster," he added, quoting the historic Polish patriot Jozef Pilsudski.

The election was held following the death in April of Lech Kaczynski and 94 other Polish officials, many of them elite figures in the Kaczynski twins' Law and Justice party, in a plane crash in Smolensk, Russia.

Analysts said in Polish media on Sunday that the Polish centre-left Democratic Left Alliance (SLD) could hamper the Civic Platform's economic agenda by calling in its political debt. In the second round, the SLD threw its support behind Mr Komorowksi.

Experts also warned that the Civic Platform could become prone to infighting after losing its common enemy in the figure of the veto-wielding, traditionalist late president.