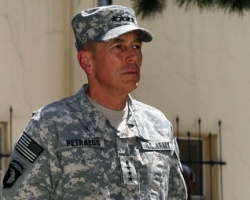 In a speech, Petraeus said NATO's strategy in Afghanistan had not changed.

"We must help Afghan leaders develop their security forces and governance capacity so that they can, over time, take on the tasks of securing their country and see to the needs of their people," he said, as cited by CNN.

"And, in performing these tasks, we clearly must pursue the insurgents relentlessly."

Petraeus said the war had reached a "critical moment."

"We must demonstrate to the Afghan people, and to the world, that al Qaeda and its network of extremist allies will not be allowed to once again establish sanctuaries in Afghanistan from which they can launch attacks on the Afghan people and on freedom-loving nations around the world," he said.

McChrystal was relieved of his duties after the general and his staff were quoted in a Rolling Stone magazine article criticizing and mocking key administration officials.

On Sunday Petraeus praised his predecessor's work in Afghanistan.

"The progress made in recent months, in the face of a determined enemy, is in many respects the result of the vision, energy and leadership he provided," Petraeus said.

The Senate unanimously confirmed Petraeus for the new position in late June. He arrived in Afghanistan on Friday.

Petraeus has said he supports Obama's plan to begin withdrawing U.S. troops from Afghanistan in July 2011 -- but insists it ought to be based on "conditions on the ground."