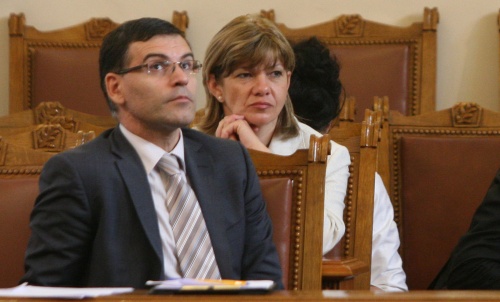 After having a positive monthly budget balance in April, in May 2010 Bulgaria is back to registering a monthly deficit, announced the Finance Ministry.

The positive news, however, is that the May deficit is BGN 60.2 M, which is one-fourth less than what Finance Minister Simeon Djankov had predicted.

April 2010 was the first month in many when Bulgaria had a positive budget balance, amounting to BGN 370 M; however, it was largely due to the annual payment of the Bulgarian National Bank to the state budget.

The Finance Ministry data shows also that Bulgaria’s fiscal reserve has decreased by BGN 100 M – down to BGN 6.6 B, from BGN 6.7 B a month ago.

Nonetheless, Bulgaria’s budget deficit in the first five months grew to 2% of the GDP compared to 1.9% in the first four months of the year. Bulgaria’s 2010 Revised State Budget Act provides for an annual deficit of 4.8%; the law has been adopted at first reading, and is yet to be voted in its final version at the second readng.

Thus, at the end of May Bulgaria had a deficit amounting to BGN 1.36 B; of that, BGN 1.123 B come from the state budget, while BGN 237.4 M are under Bulgaria’s balance of EU funds and contributions.

The annual payment made by the Bulgarian National Bank from its 2009 balance to the state budget in April 2010 was BGN 354.7 M, or 18.2% more than was originally expected.

Bulgaria’s January-May 2010 revenues were BGN 427 M smaller than the revenues in the same period of last year. This has been explained by the Finance Ministry with one-time advance payments from the EU funds made at the beginning of 2009.

Compared to the same period of 2009, Bulgaria’s state spending has increased by BGN 229.2 M; the non-interest expenditures are up by BGN 244.2 M.

In the first five months of the year, the Bulgarian government has paid BGN 641 M more year-on-year for social security and health insurance.