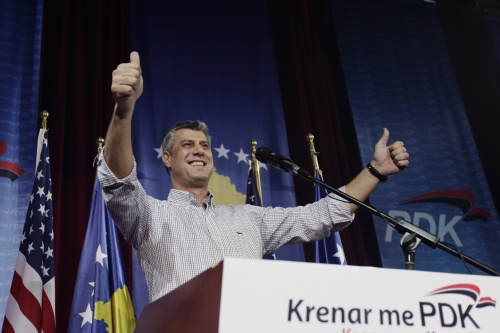 Prime Minister Hashim Thaci has told Kosovo’s MPs to disregard any claims that the Kosovo government has floated ideas for exchanging territories with Serbia.

He said Thursday any such allegations are purely media speculations, and ruled out any possibilities for negotiations with Serbia, as cited by KosovaPress.

The ethnic Albanian Republic of Kosovo contains a Serbia minority in its northern part, while parts of Serbia bordering its former province are also Kosovar-populated. Thaci, however, has sought to assure the Kosovo deputies “that there is no idea for exchange of territories between Kosovo and Serbia.”

Meanwhile, another statement of Thaci spurred a negative reaction in Serbia.

“We are ready to recognize Serbia as a state so we have made a step forward but I know that even Belgrade knows that Kosovo is an independent and sovereign state, and I have an unofficial recognition that one day Belgrade with recognize Kosovo,” Thaci has said in an interview for the Serbian newspaper Nin adding that the source of this information was high-level Serbian government representatives.

Serbia’s formal position is that Kosovo, which declared independence on February 17, 2008, is its province and that it will never recognize its independence.

“I think that if Tadic wants to get Serbia to join NATO and the EU, he must recognize the Republic of Kosovo. Every single recognition is important for us but Serbia’s recognition will have a special meaning because we have a bitter past. We have to shut this page in our relations and to focus on EU and NATO integration,” the Kosovo PM stated.

Thaci’s claims about the promise of a future Serbian recognition were promptly refuted by Borko Stefanovic, advisor to the Serbian Foreign Minister, in an interview for the Serbian radio B92.

“This is rubbish. There is no politician in Serbia who might say such a thing, neither in public, nor in private,” Stefanovic has stated.