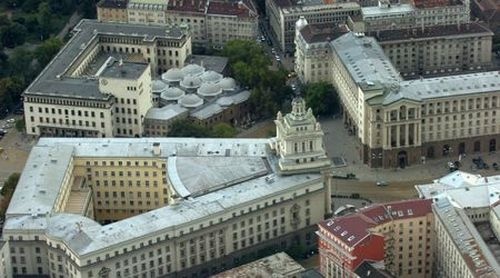 The inner yard of the building of the former Communist Party headquarters (left) under a glass dome might become the new plenary hall of the Bulgarian Parliament. Photo by Dnevnik

Bulgaria's ruling party GERB has announced it is taking actions to change the location of the plenary meetings of the Parliament.

The co-Chair of GERB, Krasimir Velchev, and the Secretary General of the National Assembly, Ivan Slavchov, have said they will form a working group for discussing the moving of the plenary meetings to the building at Sofia's Alexander I square.

The working group will include architects, engineers and representatives of all the parliamentary groups, and the current building of the National Assembly will become an art gallery, Velchev and Slavchov told the Bulgarian Darik Radio Wednesday.

Velchev said that saving money was the main reason for the moving, and added that it might also improve the quality of work of the MPs.

“If the Parliament gathers in one building, it could be done so that the building is supporting itself, which would mean 25% cut of the National Assembly's expenses. Moreover, with this building we not only have expenses for its support, but also for time and transport. When we move, the quality and organization of the work would be better,” he said.

GERB have declined the idea of moving the meetings to the “Sveta Sofia” hall in the building at the Alexander I square and is now considering the inner yard of the building, known as the former Communist Party headquarters.

“We have to do something for the people after us. This Parliament should leave something for the future. This is the other option that has been considered. There were some ideas, which in the end merged into one, like the Bundestag in Germany, turning the inner yard into a plenary hall. Of course, this will cost more investments, but it will be something that will stay for the future generations,” Velchev said.

In 2008, Bulgaria's Socialist Party had an idea to move the Parliament to the inner yard of the building known as the former Communist Party headquarters in downtown Sofia.

Instead of a roof, the new building was going to have a glass dome similar to that of the German Bundestag in Berlin. A new main entrance for the new parliamentary building would have also been created. It would have been located at the back of the present building, and would have opened up into the Knyaz Aleksandar I Square, and the former Tsar's Palace.