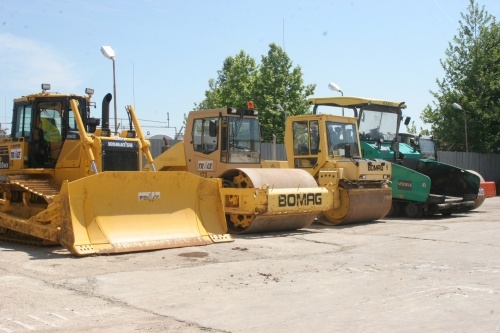 Heavy-duty road construction equipment is on stand-by, ready to begin building the next section of Bulgaria's “Trakiya” highway. Photo by BGNES

Bulgaria's blue-chip infrastructure company Holding Roads placed the lowest bid for the construction of a 47.7km section of Trakiya motorway, which will link the towns of Yambol and Karnobat.

Thirteen companies filed bids in the tender for the construction of the stretch, which is projected to cost about EUR 146 M. The bids were opened on Tuesday at Road Infrastructure agency.

Construction works of what is the last stretch of the highway are scheduled to start in September.

Though still under construction Trakiya is the Bulgarian highway project which is closest to completion. It will connect the capital Sofia with the Black Sea city of Burgas. A total of 328 km of the 443-km highway have already been built.

Bulgaria’s tie-in "Unified Highway Trace" won the tender for the construction of the 32-kilometer-long section of the Trakiya, linking the city of Stara Zagora and the town of Nova Zagora, at the end of February and a month later signed a contract with the Bulgarian Road Infrastructure Agency.

The Bulgarian consortium submitted the lowest bid - BGN 137,86 M – in competition with three other approved applicants. 4 000 jobs will be created by the project in the Stara Zagora region.

Construction works are scheduled to be completed in 25 months. The price of the construction is estimated at about BGN 138 M, 30-35 % of the funds will be made available by the end of the year.

Greece's Aktor placed the lowest price offer of EUR 111.6 M in a tender for the construction of 35.7 kilometres of Bulgaria's Trakiya motorway, that would link the towns of Nova Zagora and Yambol, in southern Bulgaria.

Construction of the second stretch of the Trakiya Highway is scheduled to begin no later than August 2010.