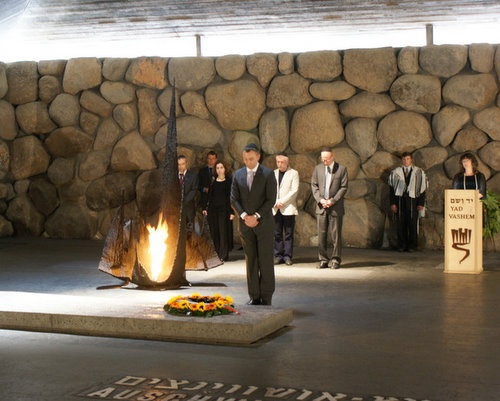 Bulgaria's Foreign Minister Nikolay Mladenov (front) during the ceremony for recognizing Bulgarian Vladimir Kurtev as "a Righteous Among the Nations" at the Yad Vashem memorial. Photo by Foreign Ministry

Israel’s Yad Vashem, the "Holocaust Martyrs' and Heroes' Remembrance Authority", has recognized Bulgarian Vladimir Kurtev as “a Righteous Among the Nations” for his role in the rescue of the Bulgarian Jews from deportation to Nazi death camps in 1943.

Kurtev’s contribution was recognized at a special ceremony Monday at the Yad Vashem memorial to the Jewish victims of the Holocaust established in 1953 in the presence of Bulgarian Foreign Minister Nikolai Mladenov, Bulgarian Ambassador to Israel Dimitar Tsanchev, and the Chairman of the Israel-Bulgaria Friendship Association, Dr. Moshe Mossek.

The medal and certificate were presented by Avner Shalev, Chairman of Yad Vashem, and were received by Kurtev’s granddaughter, Jasmina Kurteva, on his behalf.

“Thank you for helping us not to forget those who had the courage to stand up against the deportation of the Bulgarian Jews. Among the many dark pages in Bulgaria’s history, the events from February 1943 are a beam of light which showed the action of civil society in Bulgaria leading to changing history, something which was supposed to happen everywhere across Europe,” Bulgaria’s Foreign Minister Nikolay Mladenov said at the ceremony as cited by the press center of the Foreign Ministry.

“The recognition for the rescue belongs to Bulgaria and all Bulgarians. This ceremony should help us all remember that we are people in all circumstances,” Kurtev’s granddaughter stated in turn.

Vladimir Kurtev (1880-ca.1946) was a Bulgarian teacher and a revolutionary and activist of the VMORO (International Macedonia-Adrianople Organization) fighting for the liberation of the regions of Macedonia and their accession to Bulgaria.

Below is an account of the 1943 events connected with the rescue of the Bulgarian Jews with the participation of Vladimir Kurtev as published by the English-language Israeli paper The Jerusalem Post (the original article can be read HERE):

More than 67 years after Vladimir Kurtev made a bold attempt to save the Jews of Bulgaria, Macedonia and Thrace, he will be posthumously honored at Yad Vashem on Monday as a Righteous Among the Nations.

Since Yad Vashem’s founding in 1953, more than 22,200 men and women from 45 countries have been accorded the honor, which is bestowed upon those who helped save Jews, at their own personal risk, during the Holocaust.

Born in Pleven, Bulgaria in 1888, Kurtev was a teacher in the city of Kyustendil, and maintained strong ties with leaders of the city’s Jewish community.

He was also a member of a revolutionary Macedonian movement, which espoused the independence of Macedonia from Turkey, and later adopted a pro-Bulgarian stance. Several of Kyustendil’s Jews were members of this movement.

On February 22, 1943, an agreement was signed between the Bulgarian Commissioner for Jewish Questions, Alexander Belev, and Theodor Dannecker, a representative of SS Commander Adolf Eichmann, regarding the deportation of 20,000 Jews from Bulgaria. The agreement was authorized by the Bulgarian government on March 2, and two days later, preparations were made for the deportation of some 12,000 Jews from Macedonia and Thrace, which were under Bulgarian rule.

Rumors about the impending deportations reached the Jews of Kyustendil, and the community received an order from a representative of the Commissioner to prepare supplies for the Jewish deportees.

The city’s Jews together with non-Jewish public figures felt impelled to act, and on March 8, a four-man delegation, comprised of all non-Jews, set out for the Bulgarian capital of Sofia in an effort to revoke the decree.

Kurtev was one of the four delegates, along with Asen Suichmezov, Petar Mikhalev and Ivan-Christov Momchilov. A larger delegation had initially been scheduled to depart, but some of the members backed out, reluctant to take such drastic action.

As the delegates left for Sofia on the train, an empty train car designated for the deportees already stood waiting at the Kyustendil train station.

Immediately upon their arrival in Sofia the following morning, the delegates met with deputy Speaker of Parliament Dimitar Peshev, who did all he could to cancel the deportations, and was removed from his post as a result.

Kurtev, Peshev and Mikhalev then met with Minister of the Interior Petur Gabrovski and demanded that he call off the deportations. When Gabrovski attempted to deny the existence of the deportation plans, Kurtev retorted that he had heard about them with his own ears, and threatened the minister with Macedonian “sanctions” if the edict wasn’t revoked.

The efforts of the delegation, as well as other actions taken by the head of the Holy Synod, Metropolitan (Bishop) Stephan and others, paid off, and a directive was issued to release the arrested Jews from the provincial towns of old Bulgaria, and to refrain from making additional arrests.

The deportation of the Jews of Macedonia and Thrace continued, however, and by the end of the same month, more than 11,000 Jews had been sent to the death camps.

Metropolitan Bishops Stefan and Kiril were recognized by Yad Vashem as Righteous Among the Nations in 2001. Dimitar Peshev and three of the four delegates were recognized in 1973 and in 1991, and received the medal and certificate of honor in their lifetimes.

Kurtev, however, disappeared after the war, and his fate is unknown – although it is believed that he may have been murdered by the Bulgarian communist authorities.

With the assistance of the Israeli embassy in Sofia, relevant documents were obtained from the archives in Bulgaria, and the recognition process was finally completed. On May 3, 2010, the Commission for the Designation of the Righteous Among the Nations decided to award Vladimir Kurtev the title of Righteous Among the Nations, and on Monday, a ceremony marking the award will take place at Yad Vashem.