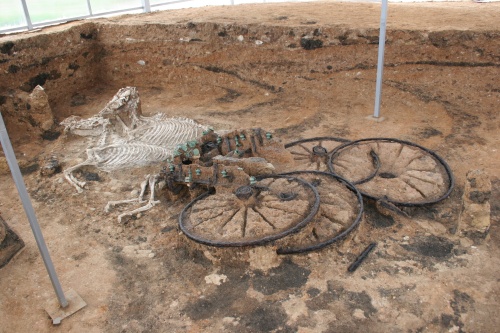 The unique four-wheeled chariot found at Karanovo is displayed in its original place. Photo by BGNES

Bulgaria's newest archaeological complex consisting of a tomb of an Ancient Thrace aristocrat and displaying a uniquely preserved Thracian chariot has been opened in the village of Karanovo Saturday.

The archaeological complex entitled “The Eastern Mound – Chariot and Tomb of a Thracian Aristocrat from 1st Century AD” is located near the town of Nova Zagora, right off the Trakiya Highway, the major route from the capital Sofia and a number of larger cities to the southern Bulgarian Black Sea coast, and is expected to attract a huge number of tourists.

The tomb and the four-wheeled chariot were discovered in the fall of 2008 including the remains of two horses and a dog.

In addition to have four wheels, which is a very rare archaeological find, the chariot is remarkable for the large size of its wheels – 1.2 meters in diameter. It also features well preserved bronze decoration.

All the finds are displayed in the tomb in their original spots.

The tomb was opened by Deputy Culture Minister Todor Chobanov, who thanked several private firms that sponsored the project and made possible the opening of the preserved Thracian tomb for visitors.