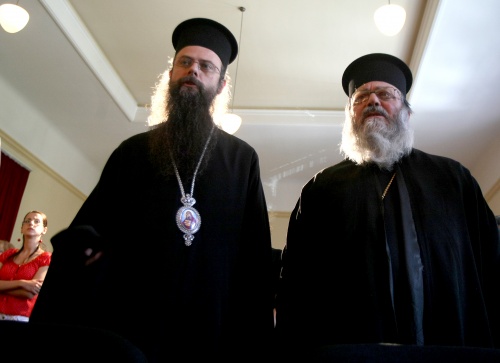 Plovdiv Bishop Nikolay (left) has declared the Sofia Pride gay parade an epitome of depravity and sin. Photo by BGNES

The Bulgarian Orthodox Church is praying for the “repentance” and “sobering up” of the participants in the Sofia Pride gay parade, said Saturday in a sermon Plovdiv Bishop Nikolay.

Nikolay, who is the youngest of all Bulgarian bishops, condemned the third Sofia gay parade as an expression of depravity and sin.

“God's scripture says that these are death sins, it is shameful to even talk about them, not to mention demonstrating them in such an overt way in the downtown of the capital before the eyes of the moral people and children. Let's watch out to protect our children from the depravity, sin, and evil,” declared the bishop.

“Our law is the Bible. As we can see European laws contradict Christian laws to a great extent. The Holy Church can give people the way to counteract against this spiritual virus,” he said shortly before the taking place of the 3rd annual gay pride parade in Sofia.

Plovdiv Bishop Nikolay is known for his hardline statements, including claiming that the holding of the 2009 concert in Sofia of US pop star Madonna caused God to punish the Bulgarian nation with the sinking of a tourist boat in the Ohrid Lake a few days later, in which 15 Bulgarian tourists perished.