Anti-Gay Bulgarian Nationalists Want to Send 'All Queers to Uganda' 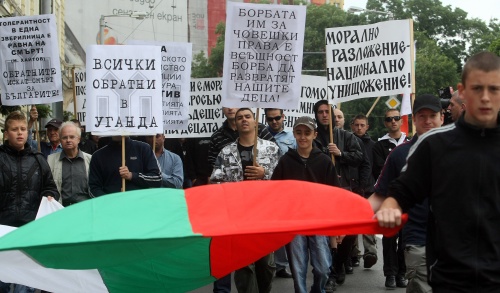 "All Queers Go to Uganda" reads one of the slogans of the some 100 Bulgarian nationalists who rallied against the 2010 Sofia Pride gay parade. Photo by BGNES

Around 100 Bulgarian nationalists have gathered to protest against the “Sofia Pride” gay parade Saturday.

The nationalists have been carrying posters saying “Gays want death for Bulgarians”, “Homosexuals out of Bulgaria, to keep our children pure”, “Bulgaria is a place for normal people – gays should go to jail” and “All the gays, go to Uganda”.

According to the organizers of the protest, about 10 nationalist organizations have participated. They explained the small number with the fact that the protest has been organized 2-3 days ago.

Simeon Kostadinov from the nationalist party VMRO said that many people did not participate in the protest because they were afraid.

“In the last month we heard a lot of lies and negative suggestions about all the nationalist organizations in Bulgaria. This is why many people are afraid of potential repressions by the police,” Kostadinov said, adding that the protesters will not be at the Sofia Pride gay parade which starts at 4:30 pm Saturday.

During the protest, 26-year old Svetoslav Dimitrov has been distributing flyers. He claimed he did not participate in any organization and came alone to the protest.

“I am against gay activists because they are fighting for political rights. They want to become a privileged group,” Dimitrov said.

“Homosexuals fornicate with minors; those who are attracted by people from the same sex are from 1% to 3% of the population but commit 1/3 of all sexual crimes against children,” said the flyers distributed by Dimitrov.

He did not confirm the authorship or the authenticity of these accusations.