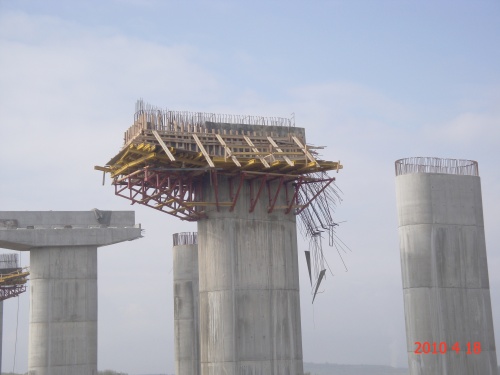 More than three years after the start of its construction, the Lyulin Highway has been completed only at 50%. The rest is supposed to be built in less than a year. Photo by BGNES

A decision of the Bulgarian Parliament to provide additional funding of BGN 86 M for the construction of the troubled Lyulin Highway has spurred a substantial political controversy.

The additional funding is over continuous disputes of the Bulgarian government. with the project executer, the Turkish construction company Mapa Cenghiz.

The construction of the Lyulin Highway started on January 31, 2007, and the 19-km road was supposed to be completed but numerous issues have led to a sizable delay.

Mapa Cenghiz won the tender for the construction offering a price of EUR 138 M, EUR 111 M of which were supposed to come from the EU ISPA Program. At the beginning of 2010, however, the Turkish company presented a list of over 40 demands bringing the price to EUR 215 M.

After negotiations, the government and Mapa Genghiz agreed on a settlement price of EUR 181 M, which is still some EUR 50 M more than the original price.

According to a report of the Bulgarian Road Agency, in order to complete the project and get the negotiated funds from the ISPA Program, Bulgaria had to sign an additional agreement with the executer of the highway, and to provide the necessary funding for its completion.

Wednesday’s vote to provide the additional EUR 86 M in the Parliament was supported by the ruling party GERB and the nationalist party Ataka but drew much criticism not only from the opposition Socialist Party and the ethnic Turkish party DPS but also from the right-wing Blue Coalition.

According to the critics, the additional funding should have been approved by the Cabinet instead of the Parliament. They attributed the move to Prime Minister Boyko Borisov’s unwillingness to assume personal responsibility for the allocation of the money, and to the inability of the other ministers to exact additional sums from Finance Minister Djankov.

The ruling party replied by slamming the former government of Sergey Stanishev for making a real mess out of the contracts with the Turkish company forcing the current Cabinet to try to clean it.

During a visit to the city of Pernik last week, Bulgarian PM Borisov declared, “I will ask the Parliament to debate and vote on the additional funds because I don’t want to assume the risk on my own to give so much money, and to be prosecuted after that if something odd is uncovered because of the previous government.”

The Parliament’s vote has affirmed May 15, 2011, as the deadline for the completion of the Lyulin Highway, and has sealed the agreement that after receiving the additional total of EUR 32 M, the Mapa Genghiz company will not have additional claims for the Bulgarian state.

The Mapa Cenghiz construction works on the Lyulin Highway have been problematic the entire time with a fourth Turkish worker losing his life in two years on the construction site.

The Lyulin Highway is supposed to become Bulgaria’s first completed highway. The 19-km road will connect the capital Sofia with the Daskalovo road junction near Pernik.

At the beginning of the week, the Turkish company announced that there 50% of the construction work has been completed but that only 5 km of the new highway are completed in full.