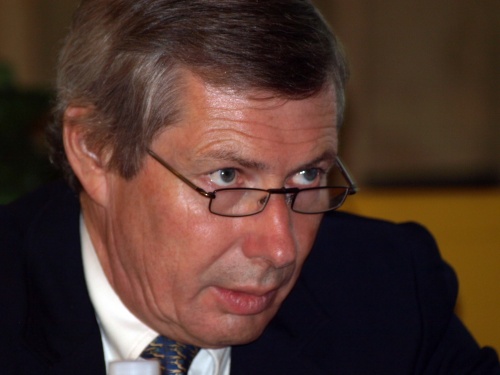 US Ambassador James Warlick has issued a statement in support of the Sofia Pride gay parade. Photo by BGNES

US Ambassador to Bulgaria, James Warlick, has issued a statement in support of the 3rd “Sofia Pride” gay parade planned for the upcoming weekend.

Warlick’s statement comes at a time when the gay parade is increasingly under fire by far-right groups, the Bulgarian Orthodox Church, and even civil society organizations claiming to promote family values.

“Four decades ago, the gay rights movement in the United States began with the Stonewall riots in New York City.  Today, this continued struggle has grown into a global movement to ensure that all people live free of violence and fear, no matter who they are or whom they love,” reads His Excellency’s statement entitled “Embracing Diversity and Promoting Tolerance.”

Ambassador Warlick reminds that US President Obama has proclaimed June as Lesbian, Gay, Bisexual, and Transgender Pride Month in the United States in commemoration of the commitment to fight discrimination based on sexual orientation or gender identity.

“W also redouble our efforts to foster a world in which societies honor every citizen and ensure that all enjoy equal freedoms under the law. The Sofia Pride Parade, which will take place on June 26 in Sofia, is an opportunity to advance this important cause.  Embracing diversity, promoting tolerance and fighting prejudice and discrimination lie at the very core of respect for fundamental human rights. I extend my appreciation to the organizers of the third Sofia Pride Parade, who work on behalf of human rights for all, and convey my best wishes for a successful and peaceful commemoration,“ concludes the US Ambassador in Sofia.