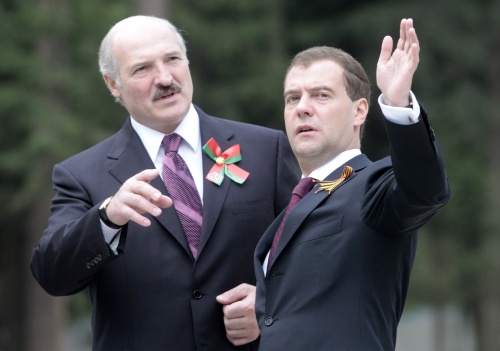 Russian President, Dmitry Medvedev (R), and Belarus counterpart Alexandr Lukashenko (h) talk as they meet in May 2010 in the presidential residence Gorki outside Moscow, Russia, together with the leaders of Collective Security Treaty Organization Member S

The President of Belarus, Alexandr Lukashenko, had ordered his cabinet to stop the transit of Russian gas through the country’s territory.

The information was reported Tuesday by the Russian news agency ITAR-TASS.

Lukashenko is quoted saying he issued the order over Gazprom’s failure to pay the money owed for the transit for six months now.

The President told Russian Foreign Minister, Sergey Lavrov, he would not allow the transit until Russia settles its debt.

According to Lukashenko, Gazprom owes USD 260 M until May and the Russian monopoly had admitted they do owe this much money.

During negotiations in Moscow on Monday Gazprom admitted they owe Belarus an amount for the gas transit equal to the country’s debt towards them. Gazprom also insist their intentions to settle the debt have been blocked by Minsk.