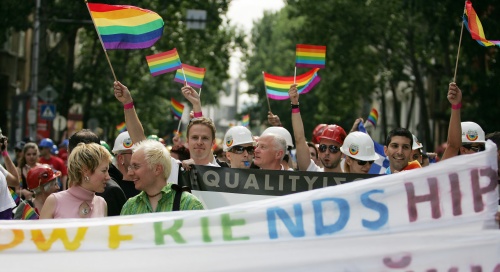 Twenty-five Bulgarian organizations have united for a joint declaration against the 3rd annual gay pride parade in Sofia.

“This is another purposeful attempt to try and wash away the conventional borders of the society and erode its perceptions in regard to the Bulgarian family,” says the declaration, sent to the Bulgarian President Georgi Parvanov, the PrimeMinister Boyko Borisov, the Mayor of Sofia Yordanka Fandakova, the Interior Ministry and the Ministry of Education.

In the letter, the organizations express their concern about the constantly escalating demands of the gay activists, adding that the decriminalization of homosexuality and the protection of the civil rights of the homosexuals is used as a base for the next step, which, in their words, is the legalization of gay marriages and permission to adopt and raise children.

The organizations complain about the one-sided obtrusion of homosexuality through the media, culture, art and education, that happens without talking about the consequences and risks for the individual and the society.

“This is an appeal to the ruling organizations in Bulgaria to support the traditional family values and the children's rights, and to restrict the one-sided obtrusion of activities, such as gay festivals and parades, which are destructive for the individual and for the society,” the declaration says.

The third annual gay parade in Sofia will take place on June 26 under the motto “Love equality, embrace diversity”.

The 2009 gay parade, passing very quickly and under enhanced security measures, gathered around 300 people. This year, the organizers expect more than 700 participants from all over the country.