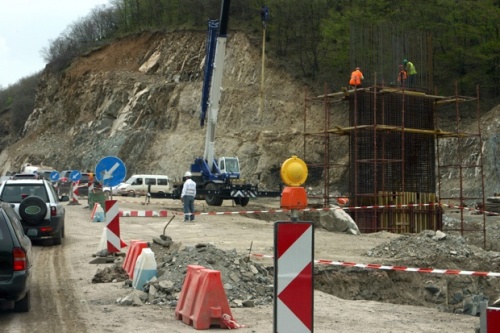 The Turkish consortium Mapa Cengiz is building Bulgaria’s Lyulin highway. 4 workers have died during incidents at the site. Photo by Sofia Photo Agency

A construction worker on Bulgaria’s Lyulin highway had died around noon time on Monday.

The latest incident brings the death toll to four after three people lost their lives in April when part of the construction equipment collapsed.

The Monday fatality happened when workers were trying to remove the casing of a concrete column. Borislav Peychev, 60, from the western city of Pernik, had been underneath the column when a hammer flew and hit him on the head. He did not wear a helmet and died instantly.

A team Bulgaria's Regional Labor Inspectorate (RIT) is probing the case. The victim had a labor contract with the Turkish consortium Mapa Cengiz, building the highway, and he had undergone safety instruction.

The probe revealed so far that the employer failed to undertake measures preventing people from entering the dangerous zone where there was a risk of falling objects and failed to mount warning signs. The fact the worker did not wear a helmet is also a violation.

An earlier probe of Mapa Cengiz by Bulgaria's Main Labor Inspectorate (GIT) established 24 violations of the Labor Law and the builder was fined BGN 200 000.

GIT had also found numerous violations during their probe of the April 17 incident in which 3 construction workers died – none of them was scheduled to work that day; they did not undergo work safety instruction, and there were no safety measures at the work site.