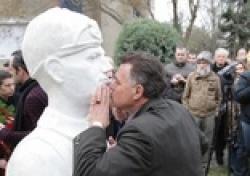 Dragi Karov is pictured here kissing the monument of VMRO leader Todor Alexandrov that he erected in his own yard in Veles in February 2010. Photo by spic.com.mk

The leaders of the Republic of Macedonia are “mentally ill”, according to Dragi Kirov, an activist of Initiative Committee of Bulgarians from Macedonia.

Speaking at a news conference at the BTA agency in Sofia on Sunday, Kirov, a native of the Macedonian town of Veles, urged the Bulgarian Prime Minister Boyko Borisov to send psychiatrists to Macedonia who can “provide treatment to the Macedonian government.”

“We don't need tanks any more, we need psychiatrists,” declared Karov as he reminded that in the late 1990s the Bulgarian government of former Prime Minister Ivan Kostov gave Macedonia for free 150 T-54 tanks, which were to be scrapped by the Bulgarian Army.

“The government of Macedonia suffers from a mental sickness, and so does President George Ivanov and the Macedonian media,” Karov said.

In his words, the “problem” is caused by what he described as “the chip implanted in them by the Serbo-communists”. “Serbo-communists” is a term used by Bulgarian nationalists and some historians to refer to the supporters of Yugoslavia in Macedonia.

“There are people in Macedonia who are not aware of their Bulgarian origin but this is not their fault, this is the fault of Serbia's servants. Macedonia currently is a Serbo-communist concentration camp,” Karev stated.

Dragi Karev is known for erecting in his house yard in Veles monuments of Todor Alexandrov and Ivan Mihaylov, leaders of the VMRO, the Internal Macedonian Revolutionary Organization from the early 20th century that in some stages of its development aspired to integrate Macedonia with Bulgaria.

After Macedonia became independent in 1991, its relations with Bulgaria have been marked by mutual claims and accusations about the ethnicity and language of each other's population. In general, the Bulgarian position is that today's Macedonian people were historically part of the Bulgarian nation and culture, while the Macedonian position claims the existence of a "Macedonian minority" in Southwestern Bulgaria. Bulgarian nationalists and most of the historians attribute the creation of the contemporary Macedonian nation to a doctrine developed in the 1940s in communist Yugoslavia aimed at distancing the population in Macedonia from Bulgaria.