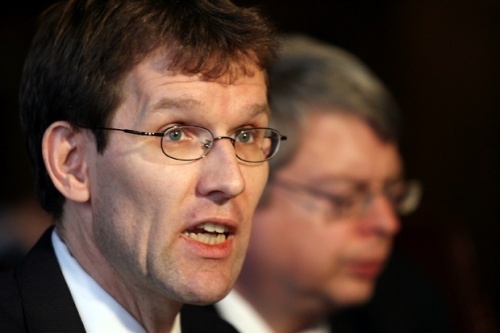 The Head of the IMF mission to Bulgaria and Romania, Bas Bakker, says anti-crisis reforms such as reducing expenditures in the public sector are needed in Bulgaria. Photo by Sofia Photo Agency

The period of economic recovery has begun in Bulgaria after the country was hit by the global crisis, according to the International Monetary Fund (IMF).

The information was reported Saturday by Darik radio, citing the Head of the IMF mission to Bulgaria and Romania, Bas Bakker, who spoke in an interview for the political talk show “The Week.”

Bakker said the crisis in Bulgaria was serious, wide-spread and felt strongly by Bulgarians, but in the light of the international situation, the country scored much better than many others, pointing out as example the stability of the banking system, which did not require interference of the government.

The IMF expert also stressed on the stability of the currency peg and the lack of pressure there while the 5% reduction of the Gross Domestic Product (GDP) is significant from Bulgaria’s historic perspective, but not as major as the 14% to 18% in the Ukraine or the Baltic States.

Bakker added the anti-crisis reforms such as reducing expenditures in the public sector are a must.