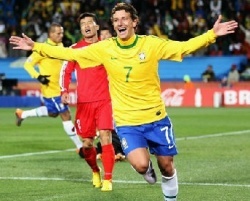 Elano of Brazil celebrates after scoring the second goal against North Korea on Tuesday. Photo by fifa.com/worldcup

Four football players from the North Korea's national team were listed “absent” in the game against Brazil from the 2010 FIFA World Cup in South Africa.

North Korea submitted in advance the names of the 23 players that were supposed to play against Brazil. However, on the game day, the country submitted a different list with only 19 players.

On Friday, FIFA said it did not have any information that the players have gone missing.

“If any of them was injured, we would have known for sure,” FIFA spokesman said, as quoted by the Italian “Stampa” daily.

The Italian newspaper goes further in its presumptions that the football players have ran away from the team because of the political regime in North Korea.

However, none of the rumors have been confirmed yet. The North Korean team is expected to hold a press conference in Johannesburg at 5:00 pm local time on Friday.

North Korea's next game will be against Portugal on Monday.