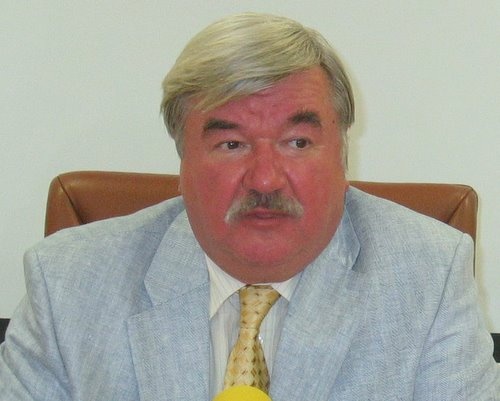 Russian Ambassador to Bulgaria Yuriy Isakov is confiderent that the Russian energy projects in Bulgaria will be realized despite the delays and uncertainties. Photo by BGNES

There are plenty of other partners interested in realizing joint energy projects with Russia if Bulgaria pulls out of the existing deals, according to Russian Ambassador in Sofia, Yury Isakov.

“I would like to underscore that it should be clear that the energy projects are in the great interest of Bulgaria. Their realization will give Bulgaria new geopolitical advantages, will boost its image and significance as an economic, energy, and political player. This is axiomatic,” His Excellency stated Tuesday in the northeastern city of Shuman referring to the recently raised uncertainty about the fate of the two Russian-sponsored large-scale energy projects in Bulgaria: the Burgas-Alexandroupolis oil pipeline, the South Stream gas transit pipeline, and the Belene Nuclear Power Plant.

Isakov’s statement comes several days after last Friday Bulgarian Prime Minister Boyko Borisov suggested that Bulgaria was freezing the Belene NPP construction till it finds a strategic foreign investor, and was giving up on the Burgas-Alexandroupolis oil pipeline because of its unprofitable and environmental risk. Borisov subsequently clarified that the Cabinet will make a final decision on the fate of the pipeline project only after an international environmental assessment is available.

“Who is going to lose if the energy projects are not implemented? I will give you a small example. Not so long ago, Bulgaria was offered to participate in the Blue Stream gas transit pipeline. For about 1.5-2 years, Bulgaria did not provide understandable answers and did not show interest, and so we realized the project with our Turkish partners. I am leaving to you the answer to the question about who benefited and who lost from that,” explained Isakov, while also saying that he had not met any representatives of the Bulgarian government after the recent statements about the fate of the Belene NPP, which is to be constructed by the Russian state company Atomstroyexport, and the Burgas-Alexandroupolis oil pipeline, a joint Bulgarian-Greek-Russian venture.

He did point out, however, that he had good working relations with Bulgarian PM Borisov and Economy and Energy Minister Traicho Traikov.

His statement had a similar message to that of critics of the cautious policy of the Borisov government who fear that Russia might seek other regional partners for its energy initiatives in the Balkans; many have pointed to the start of Russian-Turkish negotiations over the construction of the Samsun-Ceyhan oil pipeline as an alternative to Burgas-Alexandroupolis.

“We are living in a competitive world, and there is a proverb in Russia and here in Bulgaria, “No holy place will remain empty.” Do you understand? We will always find partners to realize our projects. Trust me, there are quite a few applicants,” the Russian Ambassador declared.

Yet, he displayed confidence that the joint Bulgarian-Russian energy projects will be realized despite the delays.

“We understand very well with that such large-scale energy projects as the ones planned in Bulgaria – and I am confident that they will happen – not everything can be immediately decided, there are always changes,” said Isakov.

In his words, Russia understood Bulgaria’s position about seeking a strategic foreign investor for the Belene NPP, and was trying to help it in that respect. It was also understanding about the Bulgarian government’s position that a positive environmental assessment was needed to start the Burgas-Alexandroupolis project.

He did argue, however, that the energy projects must be processed more quickly. “We have told our Bulgarian partners more than once that there are all kinds of reasons to accelerate our cooperation,” declared the Russian Ambassador.

The contracts for the three Russian energy projects in Bulgaria were signed during then Russian President Vladimir Putin’s visit to Bulgaria in January 2008 but not a single one of them has seen the start of its construction yet.