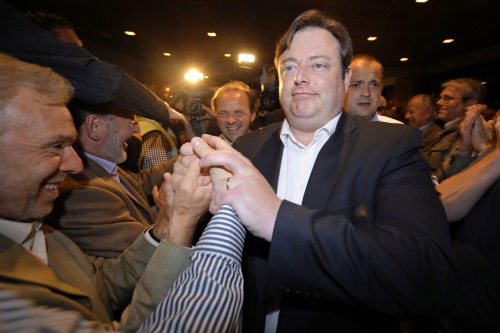 The NVA took 27 seats in the 150-member assembly, bringing the country closer to a split.

The party, led by Bart De Wever, wants to more fully divide the country between Dutch-speaking Flanders and French-speaking Wallonia.

But the NVA would have to form a coalition with Wallonian parties.

Some analysts believe the next government will take in as many as eight parties, the BBC's Dominic Hughes in Brussels reports.

Such a coalition might force NVA's De Wever to tone down his Flemish nationalist rhetoric.

"The NVA has won the election today," he told his supporters after Sunday's poll, in which his party increased its representation in the lower house of parliament by 19 seats.

The French-speaking Socialists are expected to gain six seats for a total of 26.

The result would be a significant loss for Premier Yves Leterme's coalition of Christian Democrats, Liberals and Socialists.

His government collapsed in April over a long-standing dispute about voting rights in municipalities around Brussels and the election was brought forward by one year.