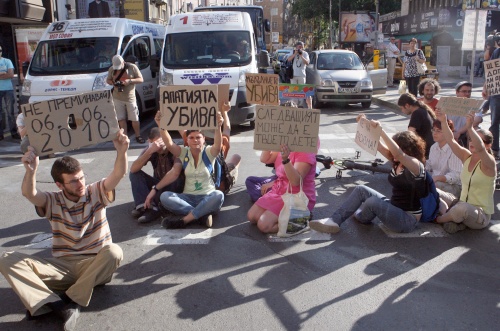 Several dozens of Bulgarian human rights activists are pictured here during a recent protest rally against xenophobia and hate crimes. Photo by BGNES

Bulgarian legislation does not appear to differentiate between hate crimes and similar violations committed because of other motives, the Chair of the Bulgarian Helsinki Committed has pointed out.

“Bulgarian law treats all beatings in a similar fashion – it does not matter if one gets beaten in a drunken melee, or if one gets beaten because of their skin color or different sexual orientation,” the BHC head Krasimir Kanev stated Sunday in Sofia at a news conference dedicated to open and covert racism, neo-Nazism, and politically motivated violence.

The initiative has resulted from the several recent cases of far-right groups attacking people in Bulgaria, the last one being a brutal attack on June 6, 2010, when neofascist youth beat four young men in a tram as the latter were on their way to a protest rally against the illegal detainment of foreigners in the notorious prison-like refugee facility in the village of Busmantsi outside of Sofia.

“What we are witnessing is a spree of xenophobia and violence inspired by the society and the media,” said Iskra Baeva, a history professor at Sofia University.

According to Ana Raycheva, a member of the Federation of Anarchists in Bulgaria, the neo-Nazis in Bulgaria are protected by the police. She criticized Interior Minister Tsvetan Tsvetano for his first statement after the June 6 attack in which he says that the public transport fight was the brought about by both leftist and rightist anarchist groups.

The Federation or Anarchists even expressed their readiness to provide a “training course” for Tsvetanov and his officers.

The organizers of the news conference emphasized multiple times that it did not matter if the crimes came from leftist or rightist groups but that the only important thing is to punish the criminals.

“Hate crimes threaten entire groups of people based on religion, ethnicity, sexual orientation. They don't target the individuals but their identity, their being different,” said Radoslav Stoyanov, an activist of the LGBT organization.

“Hate crimes are punishable but not in Bulgaria. The Bulgarian Internet space is filled with mushrooming sites of neo-Nazis which freely admit teenagers and train them to hate Turks, Roma, Jews, homosexuals,” he added.

An African refugee, Javed Nuri, who has been kept illegally in the Busmantsi facility, declared that he has been living in Bulgaria for eight years and has been fighting discrimination constantly. In his words, he had been the victim of racially-motivated attacks five times, with the police failing to react to his calls, and the prosecutor's office dismissing his suits.

“Silence against fascist terror is what makes it possible,” reads a statement of the organizers of the press conference who recently staged an anti-xenophobia rally before the Busmantsi facility. They demand adequate sentences for those who organized and executed the tram beating on June 6.