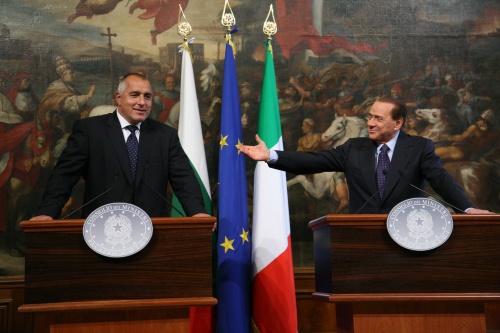 Borisov is welcoming Berlusconi in Sofia Sunday. Photo by BGNES

Italian Prime Minister Silvio Berlusconi is arriving to Sofia for the birthday of his Bulgarian counterpart Boyko Borisov.

Borisov is meeting Berlusconi at the airport, and is hosting a formal state dinner. After that, in the afternoon, the two prime ministers are scheduled to open in Sofia a monument of Italian national hero, Guiseppe Garibaldi.

The monument made by Bulgarian sculptor Georgi Chapkanov will be located on the already existing Garibaldi Square in downtown Sofia, which has recently been cleaned up and reconstructred.

The erection of the Giuseppe Garibaldi monument in Sofia is a reciprocity action of the Bulgarian government to the inauguration of the monument of prominent Bulgarian writer Ivan Vazov on May 21, 2010, in Rome.

This will Berlusconi second visit to Sofia and third meeting with Borisov in 9 months.