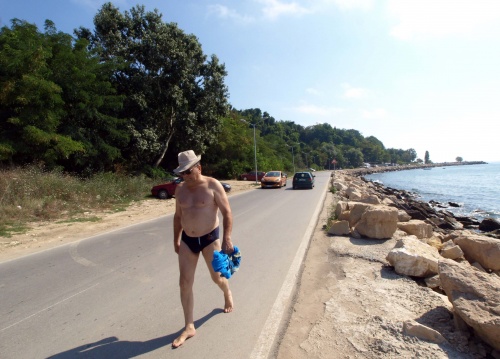 “Alley One,” in Varna's beautiful “Maritime Garden” is a prime beach-front property. Photo by BGNES

The Regional Directorate for Construction Control in Bulgaria's Black Sea capital Varna announced Wednesday they are halting the controversial construction on the so-called “Alley One” in the city's park “Maritime Garden.”

According to the Directorate, which is under the Regional Ministry, the Varna City Hall had violated the law by issuing building permits for beach-front construction. They further say they will ask the Prosecutor's Office to begin a probe against Varna's Chief Architect, Petar Yordanov.

The permits are deemed illegal because they have been granted without preliminary approved projects for the buildings and permits for stabilizing the landslides and for the draining of the terrain.

In the beginning of June, the Varna City Hall announced their decision to give rights for the construction of 5 buildings along the beach-front alley to “Holding Varna,” which is a company belonging to the murky, surrounded by secrecy and legends, business group TIM.

The move stirred outrage among local residents and several NGOs, involved in the battle to preserve Varna's beautiful park.

Petar Yordanov insists the Regional Ministry had given them the go ahead to issue the building permits under the condition the construction would not begin before the landslides in the area are stabilized, something Regional Minister, Rosen Plevneliev, firmly denies.

In response to Plevneliev, the Mayor of Varna, Kiril Yordanov, distributed on June 4 an open letter to the media, insisting the authorization in question had been personally signed by Minister Plevneliev on January 25, 2010.

"Holding Varna" announced plans to begin cultivating the terrain on October 1, and then start the building construction.