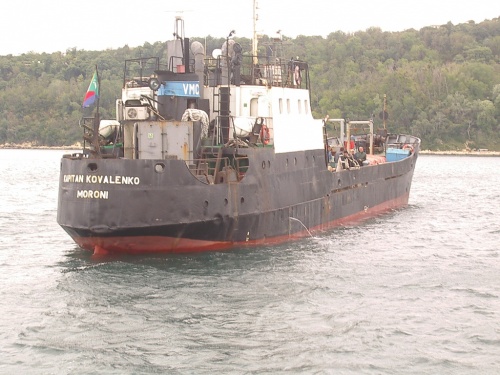 The “Captain Kovalenko” ship, which according the Bulgarian Finance Minister and Customs Agency, was, allegedly, busted with a huge load of contraband cigarettes in Bulgaria's Varna. Photo by www.mitnici.eu

The Customs in Moldova declared that the cigarettes seized by their Bulgarian counterparts in the Black Sea city of Varna are not contraband, but legal cargo.

The information was reported Tuesday by Darik radio, citing local press and the spokesperson of the Moldavian Customs, who had informed the cigarettes in question have been manufactured by the Moldavian State tobacco company Tutun CTC. The Customs documents have been further verified by the Moldavian Center for Combating Economic Crime and Corruption.

The spokesperson further informs the load had been also checked by Romanian Customs agents, who did not find anything wrong either.

“This has been legal export and the Moldavian Customs have no comment and connection with contraband accusations of Bulgarian authorities," he said.

On Sunday, Finance Minister, Simeon Djankov, announced the seizing of the record-large contraband cigarettes, informing it was one of the most successful operations ever of the Bulgarian Customs Agency, conducted jointly with the EU anti-fraud office OLAF. The cigarettes are the Chinese Jin Ling brand, a generic version of the American “Camel.”

Surprisingly enough, in the wake of the Minister's words of praise, the Bulgarian daily “Trud” (Labor) published Monday an article, citing the Director of Border Police in Varna, Dimitar Vassilev, saying he did not know anything about contraband, and a ship with contraband cigarettes being at either of the 2 Varna ports, adding he was stunned by Djankov's words.

The cargo in question had been shipped by a company in Moldova with a final destination Egypt.