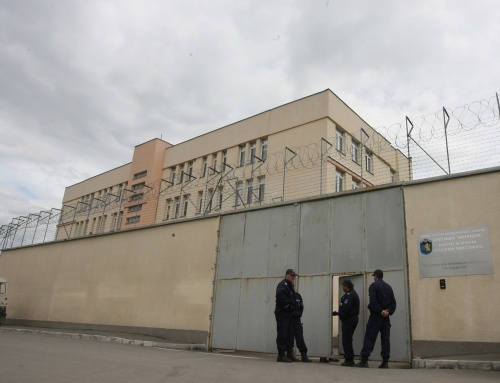 The Special Centre for Temporary Accommodation of Foreigners in Busmantsi is widely known as the Bulgarian Guantanamo. Photo by BGNES

Eight men, believed to be Neo-Nazis, has been arrested for attacking youngsters in a tram on Sunday morning, the Bulgarian interior minister said Monday.

According to Minister Tsvetan Tsvetanov, some of the attackers have previous criminal records for hooliganism. The gang included about 15 people, say witnesses.

The arrested beat four youngsters between 17 and 23 years old in Sofia public transport tram. 17-year-old boy suffered the most injures. He was admitted in Child Antischock Hall in “Pirogov” Hospital with fracture of left elbow, left clavicle, bone of the left palm, as well as head wounds.

According to the doctor, Hariton Novkov, the boy is in good overall condition and will recover quickly if there is no inflammation.

The beaten young people were on their way to rally against the illegal detention of foreigners at the Special Centre for Temporary Accommodation of Foreigners in Busmantsi, widely known as the Bulgarian Guantanamo.

The Centre has come under fierce criticism by NGOs and intellectuals for making locking people up pretty much the norm, holding people not temporarily but for years, providing no information how long they are going to be detained, imposing information blackout on the self-abuse and suicide attempts many detainees resort to.