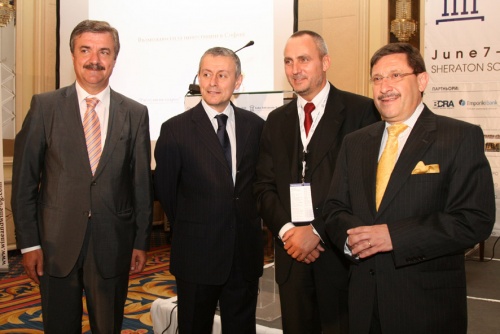 The main topic of the 2010 edition of the international conference is, “1990–2010: 20 Years of New Banking in Bulgaria. The Experience and Role of the Bulgaria Financial Sector for Recovery from the Crisis”.

Detailed information about the forum is available on its website HERE (in Bulgarian).

The forum will continue from June 7 till Jun 9, and will feature a number of Bulgaria’s leading financiers and economists from the government institutions and the private sector. This is the first time it is held in the capital Sofia after the organizers decided to move it from the city of Plovdiv and to make it an event of an even greater scale.

It kicked off formally at 10 am on Monday in the Sheraton Sofia Hotel Balkan. Solomon Passy – former Bulgarian Foreign Minister and President of the Atlantic Club in Bulgaria – who is one of the forum’s organizers, has described it as “Bulgaria’s banking event of the year.

In a special address to the organizers and participants of the forum, Prime Minister Boyko Borisov has pointed out that Bulgaria is a safe place for investors with a great potential for growth.

The “Banks Investment Money” expo will include presenting “Financial Products of the Year” awards in 11 categories. Together with the InvestBulgaria Agency, the organizers will hand prizes for “Foreign State with Greatest Investment in Bulgarian Industry in 2009” and “Foreign Corporate Investor of 2009.”

The 8th edition of the “Banks Investment Money” expo will include for the first time an award in a new category, “Financial Institution of the Year,” for which the nominees are both banking and non-banking institutions.

The “Money for Your Business” initiative is also part of the 2010 edition of the forum. It provides private companies and municipalities with the opportunity to present their ideas before creditors and investors in order to seek funding. The initiative is supported by the Bulgarian Credit Rating Agency and the InvestBulgaria Agency, and will entail a special award for “Best Investment Project.”