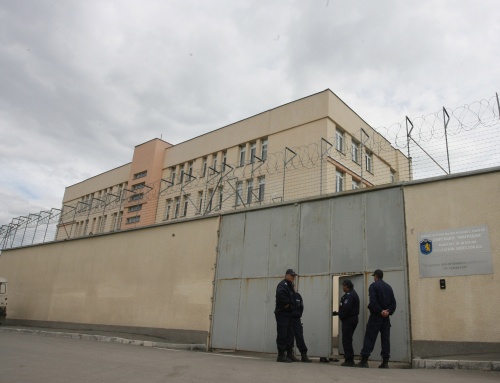 The Special Centre for Temporary Accommodation of Foreigners in Busmantsi is widely known as the Bulgarian Guantanamo. Photo by BGNES

A group of Neo-Nazis has beaten black and blue young people, who were on their way to rally against the illegal detention of foreigners at the Special Centre for Temporary Accommodation of Foreigners in Busmantsi, widely known as the Bulgarian Guantanamo.

The attackers, who wore dark and hooded sweatshirts, turned on the passengers aboard a public transport tram in Sofia Sunday morning. The accident occurred for no apparent reason shortly after 10.30 am close to the stop at Iskar station. Four passengers were seriously injured.

The rally gathered about fifty people, who wanted to voice disagreement with the illegal and random detention of foreigners in the center, including those, who are awaiting to obtain refugee or humanitarian status, those who pose no threat to the society, people with serious heath problems, pregnant women and mothers with children.

The protesters demanded that lawmakers adopt an amendment to the Law for Foreigners in Bulgaria, which will provide for the status of illegal immigrants, so that they can have access to education, health care, labor market and the right to a private and family life.

The center, also called a "home", is supposed to serve as temporary residence for illegal immigrants or people whose application for refugee status was rejected and are waiting to be deported.

It however has come under fierce criticism by NGOs and intellectuals for making locking people up pretty much the norm, holding people not temporarily but for years, providing no information how long they are going to be detained, imposing information blackout on the self-abuse and suicide attempts many detainees resort to.