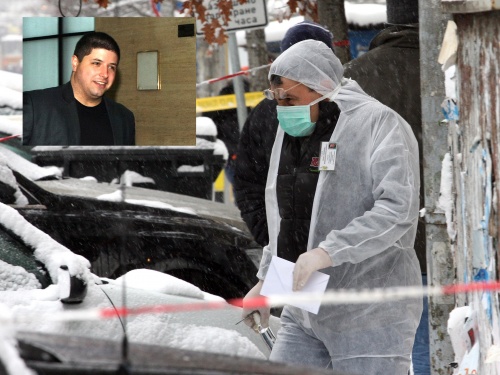 Bobi Tsankov was shot dead on January 5 as he was entering an apartment building in downtown Sofia. Photo by BGNES

Yuliya, the wife of controversial Bulgarian radio host, Bobi Tsankov, gave birth to a baby girl 5 months after his murder.

The girl will be named after her mother.

Yuliya is an investigator with the 6th Police Precinct in Sofia. She married Bobi Tsankov on November 22, 2009. This has been Tsankov’s second marriage. He was married to his first wife, Diana, for only a year before she filed for divorce. After hearing the news about his murder in January, Diana said she was not surprised.

Bobi Tsankov was gunned down in broad daylight in downtown Sofia on January 5. The two gunmen escaped on foot.

Tsankov, who frequently reported on organized crime in Bulgaria, died at the scene.

Bulgaria’s alleged crime bosses Krasimir and Nikolay Marinov, aka The Marguin Brothers and the Roma boss Sako are the prime suspects in ordering Tsankov’s murder, but the Prosecutor’s Office has failed so far to present sound evidence for their conviction.

Tsankov, when still alive, was tried for fraud involving radio games in numerous cases, and always said he was afraid for his loved-ones. When Yuliya became pregnant, the journalist, who had many debts to settle, became increasingly alarmed about her safety. Rumors even say Yuliya had been kidnapped at some point by criminals wanting to scare Tsankov.