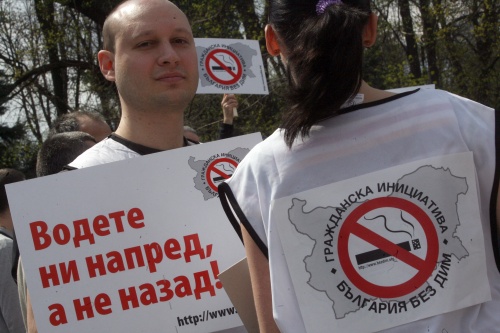 The ruling-party proposal to water down a full smoking ban triggered mass protests across Bulgaria. Photo by BGNES

After being in force just for three days, the full smoking ban, adopted by the previous parliament, is officially abolished as of June 4.

The amendments to the Health Act, which introduce more liberal rules for smoking in public spaces, have been promulgated in the Friday's edition of the State Gazette.

The actual introduction of the eased smoking regime however will be only after three months, during which the Council of Ministers must issue their own order specifying the rules for smoking in public spaces.

The draft legislation surprisingly managed to fuse the ruling center-right GERB with the main opposition Socialist Party. The ad hoc coalition claimed that the proposed relaxation of a ban on smoking in all public places would avoid hurting the tourist industry during tough economic times.