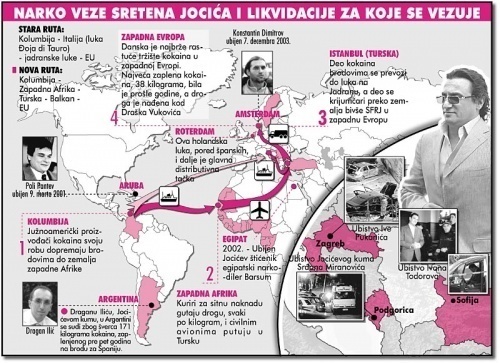 Croatian authorities have firm evidence to link Sreten Josic and Robert Matanic to murder and kidnapping in Bulgaria. Photo by BGNES

The Serbian Drug Lord, Sreten Josic, was sentenced Thursday to 15 years of jail time by the Supreme Court in Belgrade for inciting the murder Goran Marjanovic 15 years ago.

The sentence is the maximum under the old Serbian law, which was in effect in 1995. Under new legislation, Josic could have faced up to 40 years behind bars.

The judge in the case said the Court has evidence beyond any doubt that Josic has been involved in Marjanovic' murder, and in July, 1995, hired two people to kill the latter in the Belgrade coffee shop “Bamby” in the “Olympus” sports complex. Marjanovic's girlfriend and customers inside the coffee shop were injured during the shooting.

Josic had been in jail since the end of April, 2009 on allegations he had been involved in another murder – of the Croatian journalist, Ivo Pucanic.

Ivo Pukanic, owner and editor-in-chief of the Croatian weekly "Nacional," and the publication's marketing director, Niko Franic, were killed by a car bomb on October 23, 2008 in downtown Zagreb. Croatian authorities say the person behind the assassination had paid EUR 150 000 for the job.

In the beginning of April 2009, Sreten Josic made headlines in Bulgaria, telling a Belgrade court he enjoyed the protection of high-ranking officials here, citing among others the name of the then Interior Chief Secretary and now Prime Minister, Boyko Borisov.

At that time, Borisov, by then Mayor of Sofia, vehemently denied the allegations, accusing the former ruling Three-Way Coalition of crafting a long-term strategy to discredit him.

When asked if he was aware of the rumors that Josic had ordered his assassination, Borisov said he had just done his job when Josic was arrested and extradited him to the Netherlands on the request of the Dutch police.