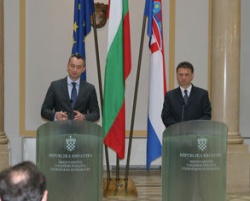 Bulgaria and Croatia have demonstrated clearly that strong actions against corruption and organized crime can happen in the Balkan region, said Bulgaria’s Foreign Minister in Zagreb.

“Bulgaria supports Croatia’s swift accession to the EU, including the opening of the remaining accession negotiation chapters. With Croatia in the EU we will have one more ally with whom we will be able to work on sorting out the problems of the Western Balkans,” the Bulgarian Foreign Minister declared in Zagreb while also emphasizing the achievements of the governments of the two nations against criminal organization and corruption.

He further discussed with Jandrokovic the possibilities for specific aid for the stabilization and reforms in Bosnia and Herzegovina.

Croatia’s Foreign Minister has requested more information about how Bulgaria organized administratively its EU accession negotiations and about installing a mechanism for the absorption of EU funds.

The Bulgarian government delegation led by Minister Mladenov was also welcomed by the Prime Minister of Croatia, Jadranka Kosor, and the Parliament Chair Luka Bebic, who thanked Bulgaria for its support with regard to the Euro-Atlantic integration of their country.