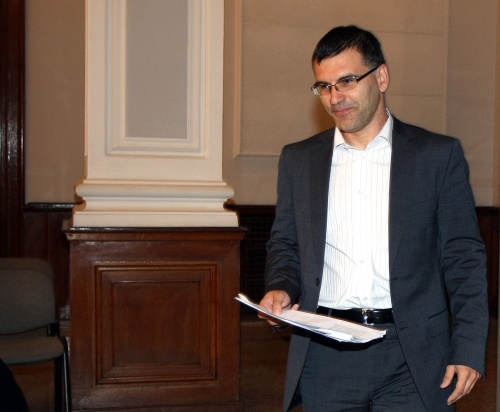 Bulgaria's Deputy Prime Minister and Finance Minister, Simeon Djankov, is on an official visit to Estonia, Finland and Sweden. Photo by BGNES

Bulgaria's Deputy Prime Minister and Finance Minister, Simeon Djankov, is on an official trip to Talin, Estonia on Monday, the Finance Ministry informs.

Djankov met with his Estonian counterpart, Jurgen Ligi, to discuss Estonia's candidature for Eurozone entry. Ligi presented his cabinet's measures for their successful austerity fiscal policy regarding the budget deficit.

Djankov presented the economic situation in Bulgaria and the trends of lowering the level of unemployment, increasing production and export, which are also observed in Estonia.

The two Finance Ministers discussed the stability of the EUR and economic situation in the EU. They expressed the common opinion that countries in Central and Eastern Europe will contribute to the economic recovery in Europe.

Djankov is meeting later with the Governor of the Estonian Central Bank while he will visit Finland Tuesday to meet with his Finish counterpart. The trip will conclude Wednesday with a meeting in Stockholm with the Swedish Finance Minister.

Last week, the new center-right government of the Citizens for European Development of Bulgaria (GERB) party approved a revised budget bill, which targets a deficit of 4.8% of GDP on a cash basis and 3.9% of GDP under EU accounting rules, far wider than initial estimates.

The move marks a notable change of course in the government's policy as over the winter and spring it insisted it will do its best to keep the deficit as low as possible, or at least under 3%, in order to meet the criteria for applying to join the euro zone waiting room, ERM II.

The GERB cabinet had only until recently seriously considered the possibility to temporarily raise Bulgaria's 20% flat-rate value added tax (VAT) by up to 4% in a bid to plug a budget gap that has thwarted the new EU member's efforts to join the euro in the near future.