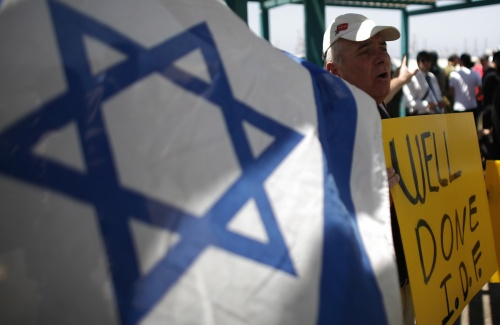 A right wing Jewish man displays a sign reading 'Well Done IDF' while waving an Israeli flag close to the port in Ashdod. A flotilla of several ships heading to Gaza were boarded by Israeli comandos earlier with considerable loss of life. Photo by BGNES

Israeli Prime Minister, Benjamin Netanyahu, who is in Canada, has cancelled his visit to Washington on Tuesday to return to Israel, BBC reports Monday, citing Israeli officials.

Netanyahu, who was scheduled to meet with US President, Barack Obama, is going back home to deal with the crisis in the region caused by an attack of Israeli commandos, who stormed a convoy of ships carrying aid to the Gaza Strip, killing between 15 and 19 people.

The Israeli PM declared earlier his "full backing" for the military involved in the raid.

The White House, on their part, said the US "deeply regrets the loss of life and injuries sustained" in the storming of the aid ship and US officials are "currently working to understand the circumstances surrounding this tragedy."

Israeli officials also say that only one of the six ships has been problematic – the Turkish ferry “Mavi Marmara,” sailing under a Turkish flag and chartered by an Islamic NGO based in Istanbul, which Tel Aviv insist is part of the terrorist group Hamas.

The Israeli commandos had tried to check only “Mavi Marmara” where they were attacked with axes, knives, bars and at least two guns, according to Israeli reports.

Meanwhile, the Bulgarian Foreign Ministry announced that two Bulgarian journalists have been arrested in the attack.