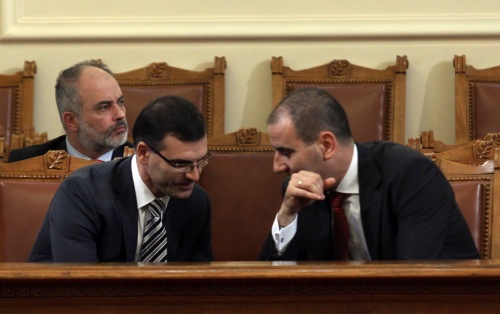 Despite Socialists' claims to the contrary, Bulgaria's two Deputy PMs Djankov (left) and Tsvetanov (right) have demonstrated cordial relations at the end of May. Photo by BGNES

“Deputy PMs Simeon Djankvo and Tsvetan Tsvetanov don’t see eye to eye. In our view, they are fight for economic domination,” Ninova said Sunday as cited by Darik Radio.

She believes that the GERB government increased the excise tax on cigarettes in order to help Greece and Romania which were the major hubs of cigarette contraband before that.

“I am citing the words of the Customs Agency head Vanyo Tanov. He said in a Parliament hearing that from a transit country for cigarette contraband, Bulgaria has become a major player on the smuggling market,” the Socialist MP said.

“If Deputy PM and Finance Minister Simeon Djankvo raised the excise tax on cigarettes in order to aid the economies of other countries, this is treachery against our budget and our people. There is no efficient combating against smuggling in Bulgaria. The small-scale operations against local grocery stores do not raise any revenues, they only generate expenses. The real fight against contraband has to happen on the border,” claims Ninova.

She said Customs Agency head Vanyo Tanov wants to create a customs police and intelligence so that the institution can investigate contraband on its own.

The Customs Agency is subordinated to the Finance Ministry head by Simeon Djankov. Over the past week there had been unconfirmed reports that Interior Minister Tsvetan Tsvetanov wanted to removed Vanyo Tanov from his position; the allegations about a conflict between the two have been denied by both Tsvetanov and Tanov.

However, Tsvetanov has criticized the work of the Customs Agency for failing to become more efficient, while Tanov has replied that his institution had limited capacity and responsibilities.