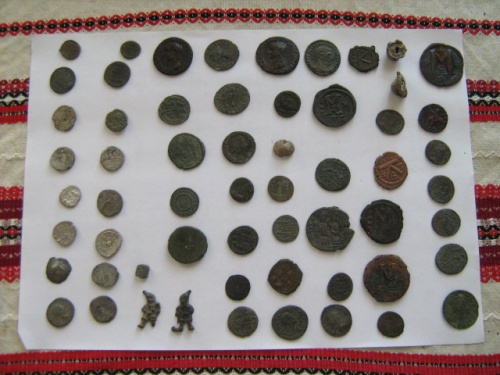 Bulgarian police found 53 antique coins in a special operation against a priest accused of illegal antiques trading. Photo by the Interior

The Bulgarian police have busted a 41-year-old priest, who organized illegal antiques’ sale over the internet.

The priest, identified at D.I., employed by the Vratsa Eparchy, managed to conduct over 1 000 illegal deals in the course of just several months, the Interior informs. He was arrested and pre-trail proceedings were launched.

The police have raided four locations in the capital Sofia, the northern city of Vratsa and the town of Oryahovo, and located 53 Thracian, Rome and Byzantine coins, jewelry and antique vessels along with a bust of Heracles and a marble head of Venus. The authorities have also confiscated an illegally owned rifle, metal detectors, and computer software.

The priest in question is from Vratsa, but since 2002 had worked at the Oryahovo Church.