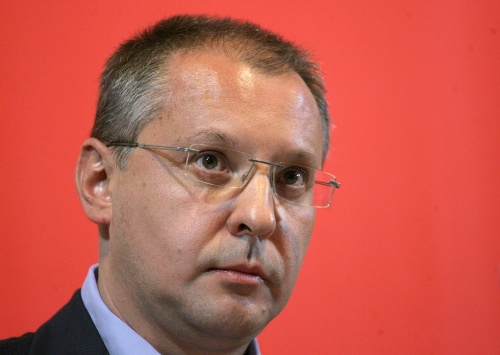 Socialist former PM Stanishev is currently under investigation over the leaking of a classified report on Bulgarian criminal world. Photo by BGNES

Sergey Stanishev, Bulgaria's former Prime Minister and leader of the opposition Socialist Party, is expected to be charged formally by the end of next week.

Unconfirmed media reports citing high-ranked investigators from the Prosecutor's Office claim that the investigation against Stanishev that started in the fall of 2009 have reached a point that allow the filing of a legal accusation.

Earlier this month Sofia City Prosecutor Nikolay Kokinov stated that the conclusion of the probe against Stanishev was imminent.

In October 2009 current Bulgarian PM Boyko Borisov, leader of the center-right GERB party, stated that Stanishev illegally took possession of and concealed a classified report from the scandal-ridden State National Security Agency DANS that specified individuals who had destructive influence on the functions of ministries and other state institutions. It is claimed that Stanishev did that in order to cover those individuals. Borisov later announced about 8 more leaked secret reports.

According to the sources, a record bail of BGN 100 000 is going to be imposed on Stanishev due to the high-profile nature of the case.

The former PM is also being investigated for providing cover for criminal groups, money laundering, abuse of funds and negligence of irregularities in the working of the State Agency for National Security.

The contentious DANS report was mysteriously handed over to PM Borisov by notorious security agent Aleksei Petrov. It was unofficially published online days after. Aleksei Petrov was arrested in February 2010 in a much publicized special police operation codenamed “Octopus”, and is currently jailed facing charges of leading an organized crime ring.

Late in October 2009 Stanishev was questioned over the concealment and leaking of the classified report, but denied any wrongdoing and described the case as provocation and undue use of “pressure”. Stanishev claims he properly returned the report to DANS, as required by law. Stanishev also relinquished his immunity as a MP, in order to facilitate the proceedings.

If formally charged, Stanishev will join 4 ministers from his cabinet who have been already brought to court: fellow Socialist and ex Labor Minister Emilia Maslarova; two former Agriculture Ministers, Valeri Tsvetanov and Nihat Kabil from DPS; and ex Defense Minister, Nikolay Tsonev from the NMSP.

The case of leaked secret reports raised considerable alarm in Bulgarian society and institutions since last fall. Former DANS chief Petko Sertov was among the ones questioned over the matter.

In 2005-2009, Sergey Stanishev was the Prime Minister of Bulgaria leading a Cabinet of a three-way coalition made up of his Socialist Party, the ethnic Turkish Movement for Rights and Freedoms (DPS), and the National Movement for Stability and Prosperity (NSMP) of former Tsar and PM Simeon Saxe-Coburg. In July 2009, Stanishev's Socialist Party was defeated in the general elections by Boyko Borisov's center-right party GERB.