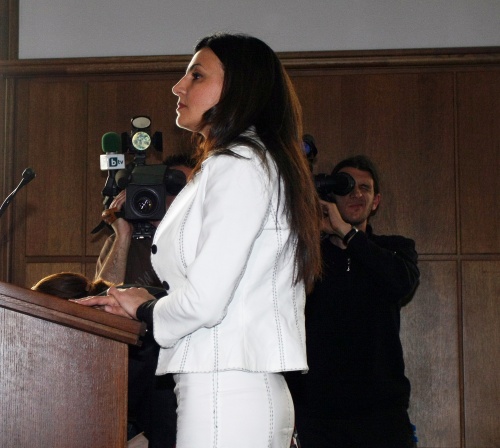 Angelina Dimitrova was acquitted on contraband and money laundering charges. Photo by BGNES

Dimitrova, whose husband rose to the ranks of Bulgaria’s top smuggler after 2000 and was murdered in broad daylight in the Dutch capital Amsterdam in 2003, was accused of contraband allegedly carried out through the Sofia Airport Customs in 2000.

The prosecutors believe that she imported goods worth BGN 700 000 by using fake invoices. In addition to that, she was accused of laundering the same sum after the sale of the smuggled goods by selling her firm Borogroup Travel London EOOD to an American-owned company.

According to the Sofia City Court judge Vladimir Astardzhiev, Kosyo Samokovetsa’s wife did not commit any crime as she notified the customs about the imported goods and their value.

“This rules out the smuggling claims, and without smuggling there is no laundering,” said judge Astardzhiev.

The Court has lifted the partial distraint on Dimitrova’s property and rejected the BGN 700 000 claim of the Finance Ministry against her.