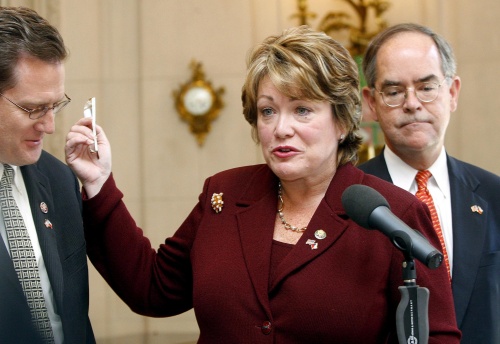 US Undersecretary of State Ellen Tauscher says America has not requested formally from Bulgaria to host missile shield elements. Photo by EPA/BGNES

The United States have not asked Bulgaria to locate elements of the missile defense in Europe on its territory, according to US Undersecretary of State Ellen Tauscher.

Tauscher, who is in charge of arms control and international security affairs at the US State Department, has made it clear in an interview for the Russian news agency Interfax the US has never asked Bulgaria to participate in the missile shield.

“While we have discussed the Phased Adaptive Approach with Bulgaria, as we have with other NATO Allies, the United States has not asked Bulgaria to host any [Ballistic Missile Defense] BMD assets,” Tauscher explains.

In 2009, the Obama Administration decided to alter the original plan of the Bush Administration to set up missile defense elements in Poland and the Czech Republic.

Under the new US plan announced in September 2009, the establishment of the missile defense in Europe will progress in four stages: locating radars on ships in the Mediterranean and on land in Southern Europe; locating SM-3 missiles in Romania and later also in Poland, and replacing them with better ones capable of protecting the entire territory of the NATO member states not just from short- and medium range missiles but also from ICBMs.

At the beginning of 2010, the US Embassy in Sofia and the Bulgarian government have revealed that there had been unofficial conversations about the possibility of Bulgaria hosting elements of the US missile shield in Europe.

According to NATO Secretary-General, Anders Fogh Rasmussen, the US missile defense in Europe is expected to be adopted as an all-NATO project during the upcoming summit in Lisbon.