What Does Britain's New Government Mean for Bulgaria and Europe?* 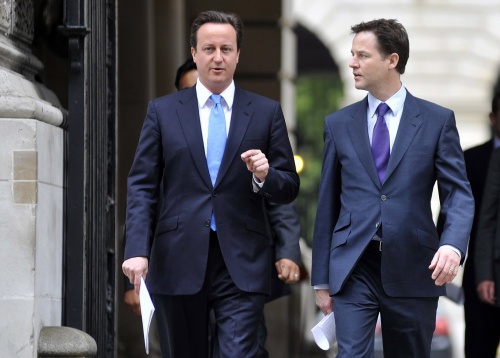 The UK’s newly formed right-of-the center Conservative-Liberal Democrats government has caught the British public and Europe by surprise, but the team of aspiring leaders in the face of the Conservative PM David Cameron and his Lib Dem Deputy Nick Clegg promises a more open political system than anyone in the country has hoped for.

As the new Parliament starts working, including 200 fresh recruits in Parliament of 650 in total, a new more dramatic realignment in the front and the back benches takes place, clearing the decks for voting on the ambitious more liberal than conservative coalition government Manifesto.

Both parties compromised so far on principle on key issues such as immigration, tackling the budget deficit and political reform for good.

New nuclear power plants, how to actually cut UK’s notorious budget deficit and the new tax system with a possible VAT hike, will be not nearly as easy to reach a deal on, but for sure Bulgaria’s tactical efforts to put eventually the country on Britain’s new political map will require a high-brow consistent and convincing diplomacy.

With a new Business Secretary of state in the face of Vince Cable, the Lib Dems leading figure on economic policy, as well as one the most senior members of his party, one might expect that Central and Eastern Europe and Bulgaria in particular will not be ignored as an investment destination.

Under Labor, UKTI, UK’s foreign investment agency, did not make sufficient efforts to benefit from the market opportunities in the region, according to the scrutinising evidence sessions held by the cross-party Parliamentary Committee for Trade and Industry.

However, one needs to remember that the EU accession happened after the UK’s Labor government, which was the only EU15 country together with Sweden to open its labor markets in 2004 for the first ten new EU member states from the start. Moreover, Gordon Brown, UK’s former Prime Minister, has famously stood for the Eastern Europeans in the crucial pre-election week, when he faced an anti-CEE immigration Labour voter in Rochdale.

“In relation to waving UK’s ban for Bulgaria and Romania to enter freely UK’s labor market, it is very unlikely that Home Office and the Foreign Office, FCO, both led by Con MPs in the face of respectively Teresa May and William Hague, will do any progress before the currently set date in 2013-2014’, said Martyn Bond’, professor in European politics at the University of London, Royal Holloway University.

Bond also said that Croatia’s EU accession is also likely to be postponed, but also expected that the new FCO’s Minister of Europe, David Lidington, a Conservative MP, will accept the drift of European policy in the new coalition government, stepping away from his party’s traditional image of European ‘hardliners’.

The new coalition government makes as a whole UK’s political set closer to that of many European countries and opens a new era in dealing with Britain for any European country, giving Bulgaria a good to attract investment and lobby for its national interests.

Bulgarian Foreign Minister’s timely decision to rationalize Bulgarian missions abroad, hopefully raising his expectations of the country’s embassies to promote Bulgarian business and talent could not have come at a better time.

Under the new circumstances, this means that Boyko Borisov’s team might need to engage with a more tactical cross-party positioning before the UK and UK-based counterparts to benefit from the contacts of Bulgaria’s ruling part GERB with the UK’s Conservatives, as well as Labor’s and Lib Dam’s pro-European orientation.

In the newly formed Parliament, the Cons hold 306 seats, Labor - 258 seats, the difference of up to 326 seats to form a government filled by the Lib Deems.

Effectively, UK as a country looking forward towards political change has moved to the left, as Labor has lost only 5 per cent of the parliamentary seats it held before 6 May as a ruling party.

This, on its part, gives Labor a good chance to become a strong opposition party under a new leadership, while the Lib Deems’ presence in government will help with dealing with aspects of the Conservative party policy that would have looked like out-fashioned and inappropriate when the British electorate voted not so much for specific parties, but for political change.

On foreign policy, William Hague’s first visit is set to the US, but Obama’s response to the inevitable goal of the UK Conservatives to step away from Europe and get closer to US. However, Obama has noted that he want to see UK as a European player, as it is so much easier for the US to deal with the EU as an entity.

Regarding Europe, David Cameron is much more likely to develop a stronger relationship with Germany than with France.

"We had a very good conversation with Chancellor Angela Merkel," said Cameron at the first Downing Street joint press-conference, a day after UK has agreed as an EU member country to be one of the guarantors for the EU’s EUR 50 M guarantee package for Greece.

On that day he left the UK public and the press with the impression that the deal with the Lib Dems to limit the non-EU immigration to the country from currently over 400, 000 to a much smaller five-digit number, had also been discussed with Mrs. Merkel, Europe’s most powerful politician.

However, getting ready to apply for the euro zone is out of question, whereas the call of the Conservative French President Nikolas Sarkozy for Britain to accept more stringent rules on the equity trading are unlikely to get a positive response across the Channel.