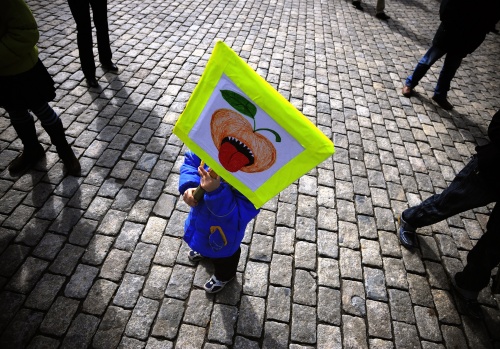 A child holds a sign during a demonstration against genetically modified organisms (GMO) in Sofia, Bulgaria, 28 February 2010. Photo by EPA/BGNES

Politics and the economic crisis may cause gloom among Bulgarians, but another issue entirely has provoked street protests and heated debates - genetically modified organisms (GMOs).

A four month-long debate on whether to allow GMOs in the country has stirred both civil society and political parties. The final outcome was an act that banned modified plants from release in the environment, confining them to labs only.

Both the ruling party and the opposition approved the GMO Act amendments, despite their earlier divergences on the issue. The changed law stipulates that GMOs are banned in a 30 km-wide buffer zone around protected territories, and within a 10-km radius of agricultural land and apiaries.

"We have achieved more severe and restrictive rules than the previous texts," said Lachezar Toshev, a lawmaker from the ruling party GERB.

This outcome appeared unlikely last October, when the debate started with the centre-right government's proposal to liberalise the rules for GMO tests in Bulgaria. It was prompted by a letter from the European Commission warning that Bulgaria is breaching European Union law by banning experiments and release into the environment of several GMO hybrids - tobacco, vine, oil rose, fruit and vegetables.

"The bans are too restrictive and do not comply with EU directives," explained deputy environment minister Evdokia Maneva. She based the legislative proposals on a request from Brussels to apply the common rules, and on a warning that non-compliance could result in sanctions.

GERB originally supported easing the restrictions, while the Socialist opposition accused the government of bowing to pressure from international companies lobbying for a wider introduction of GMOs.

However, the final outcome was determined not by political and legal deliberations, but by civil society. The parliamentary debates on the new texts were accompanied by strong public opposition to the release of GMOs. A coalition of non-governmental organisations, farmers' unions and internet activists, mobilised through popular online forums, organised substantial protests and turned into a powerful lobby against the legal amendments.

Bulgarians feared the food chain would be contaminated by GMOs. Many even suspected a powerful international conspiracy pushing for the release of "dangerous" crops into the Bulgarian environment. A public opinion poll carried out a day before the final parliamentary vote indicated that 97 percent of Bulgarians opposed GMOs.

The outcome was an almost total ban on genetic hybrids. They are to be kept under lock and key in laboratories and can only be used for scientific experiments. The only exception made is for genetically modified plants that have been authorised for sale in the European Union.

Anti-GMO activists hailed the decision as "crème de la crème with a cherry on top". Now the ball is in the court of the European Commission, which may decide to start an infringement procedure against Bulgaria for failure to comply with EU law - and for bowing to the wishes of its citizens instead.