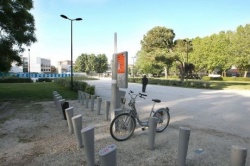 Square Andre-Meunier in Bordeaux, one of the spots where the underage boys were forced to work as prostitutes. Photo by sudouest.fr

The police in the French city of Bordeaux have shattered a crime ring organized by parents from Southern Bulgaria forcing its own children to be prostitutes.

Nine parents from a Bulgarian village near city of Pazardzhik were arrested for forcing a total of 20 boys between 12 and 16 years of age to work as prostitutes with clients from around France.

The fees paid for their services started from EUR 150. According to the French investigators, the parents took the money, and wired it to Bulgaria to finance the construction of houses, reports the regional French paper Sud Ouest.

The officers of the French service for fighting child abuse are reported to have been shocked by the scope and cruelty of the “family business.”

This ring organized from the parent pimps is said to be the largest child prostitution network ever in France.