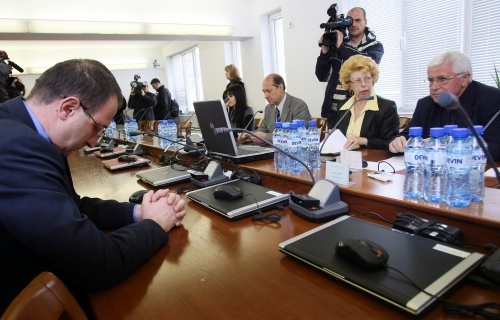 Roman Vasilev (left) is bowing his head as he is scorned by the Ethics Commission of the VSS. Photo by BGNES

In the beginning of April while detaining the ex Minister Vasilev called him a “criminal” and ordered him to kneel down even though he was already handcuffed. This led to a public outcry, and Vasilev, who apologized profoundly arguing that he succumbed to emotions, has been condemned by the Ethics Commission of the VSS.

The Prosecutor's Office decided to not penalize their colleague and left the consequences to the VSS.

The reprobation is listed in the employee's record for one year and is stricken after that. During the one year period the employee cannot be appointed or apply to a high-ranking position and is not eligible to receive bonuses.

The sanction means Vasilev, most likely, will not be able to be included in the planed team of special prosecutors, who will deal only with organized crime, unless his punishment expires before the beginning of the selection process.

VSS said they decided to not impose a harsher penalty on Vasilev, such as salary reduction, because he is a prosecutor leading many and serious cases.