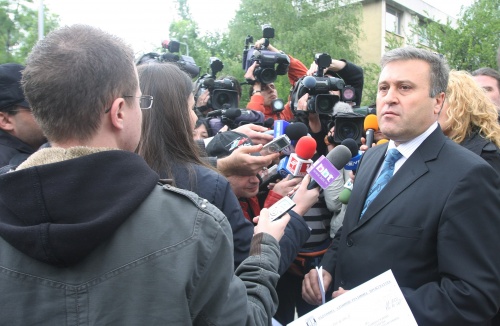 Kabil, who was minister in the Tripartite government was accused by the Prosecutor's office of abusing his power by single-handedly giving the go-ahead of two illegal deals for forest swaps.

The state, on the other hand, has incurred losses of BGN 115 640 603 according to data of the prosecution.

Kabil has been imposed a bail of BGN 50 000. However, the country's ex agriculture minister has released a media statement, saying that he is innocent and cannot possibly find the money for his bail.

He also explained that while still a minister, he had cautioned against possible malfeasance in the agriculture sector, sending a letter in 2007 to the Bulgarian Chief Prosecutor and demanding a probe into murky forest and land deals.

The Prosecutor's reply was that an inspection had been launched but no offenses had been uncovered, said Kabil Thursday, citing the reply letter he had recieved.

Kabil is Bulgaria's second agriculture minister from the Tripartite coalition government to be charged with illegal land swapping.

In the fall of 2009, Valeri Tsvetanov, who replaced him as agriculture minister in 2008, was also investigated over accusations of murky land deals.

The Bulgarian Ex Head of the State Forestry, Stefan Yurukov, himself was accused of swapping two state plots with a total area of 24,117 decares in the area of the southeastern Bulgarian coastal town of Sozopol and a plot in the northeastern town of Nessebur with a total area of 7,435 decares as well as three plots in the region of the Varna municipality.

The illegal swaps in Nessebar and Varna alone have cost the state a total loss of about BGN 5 M.