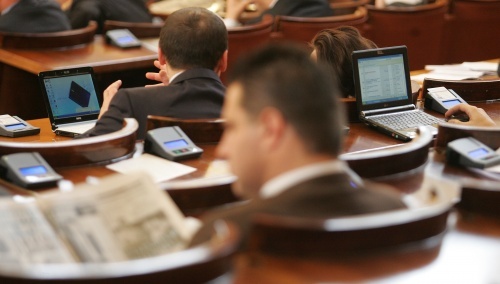 The gaffe forced MPs from the center-right majority to suspend the vote and convene a meeting of the health commission to solve the issue. Photo by BGNES

Bulgaria's parliament delayed on Thursday its conclusive vote on the ruling-party proposal to water down a new smoking ban in the country after a ridiculous gaffe.

Following an apparent misunderstanding of the texts put to vote, the MPs allowed youngsters under 18 to enter disco and night clubs, but barred their access to restaurants and coffee shops, whose owners allow smoking.

A day earlier the MPs passed at second reading the more liberal rules for smoking in public spaces and abolished for good the full smoking ban.

The smoking ban was voted by the previous parliament and was supposed to become effective on June 1, but the current MPs approved the amendments to the Health Care Act, proposed by the ruling Citizens for European Development of Bulgaria (GERB) party.