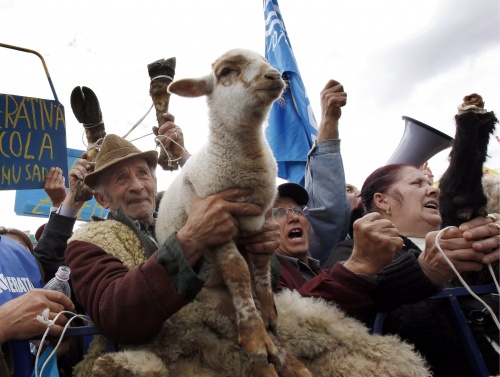 Romanian agriculture workers hold up a lamb and shout anti-government slogans during the Wednesday protest rally in Bucharest. Photo by BGNES

Tens of thousands of demonstrators gathered Wednesday in the Romanian capital Bucharest to protest against the cabinet's austerity measures.

According to different reports the crowd includes anywhere between 20 000 and 50 000 people.

The government has proposed wage cuts of 25% and retirement pension cuts of 15% in order to reduce the country's budget deficit. Romania's economy shrunk more than 7% last year and it received a USD 25 B IMF bail-out.

The protest began at 9 am and has been attended by public sector workers from all over the country – doctors, teachers, prison employees, border police, State employees, transportation workers and retirees. Many of them arrived by bus and police blocked downtown streets to ensure security.

A stage has been erected showing a table divided in two – for the rich and for the poor, with menus including on one side distribution of land plots, vacation homes, forests, public tender contracts and tax fraud, and low wages, pensions and reduced benefits on the other.

Demonstrators carried banners criticizing the centrist government of Prime Minister Emil Boc, who was reappointed in December after being forced out when his coalition collapsed in October, and President Traian Basescu. Policemen, who joined the rally, were met with applause.

BBC reports that Economy Ministry official Marcel Hoara was booed and sprayed with water and stones after joining a live televised debate in the middle of the protest. Police escorted him from the area.

2 000 police have been mobilized to provide security. Officials report no injuries and incidents, but three people have been sent to hospitals with hypertension, malaise and loss of consciousness.

Unions are threatening a general strike later this month if their demands for ousting the cabinet are not met.

The rally is reported as the biggest one since the Romanian Revolution.

Marian Gruia, Head of the Policemen's Union, called on Romanians to unite, "as we did in 1989, when we overthrew the dictatorship" of Communist leader Nicolae Ceausescu.

Meanwhile the Lustration Act, ((i.e. a law limiting the participation of former communists and communist security collaborators in politics) which had been on the table since 2005, was passed by the Romanian Parliament, banning those who fall under it from being appointed or hired for high-ranking positions for a period of five years.