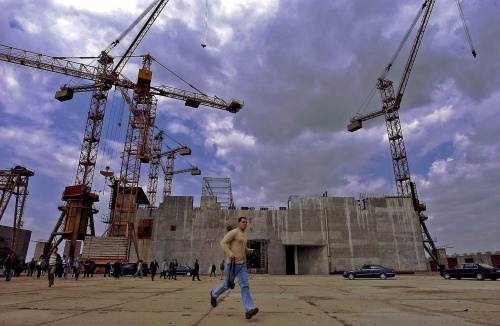 A file photo dated 22 April 2004 of people walking past an unfinished building of the first 1000 MW unit at Bulgaria's second nuclear plant in the town of Belene. Photo by EPA/BGNES

Serbia's energy minister has confirmed reports that the country is considering participation in Bulgaria's second nuclear power plant, which has stalled over lack of funding.

"The Bulgarian prime minister officially made an offer for Serbia to participate in financing construction of the Belene plant," Energy Minister Petar Skundric told an energy conference. "We haven't made the decision yet, but we are interested."

In his words the project would show that the country, which has an embargo on nuclear power plants until 2015 put in place following the Chernobyl disaster, is able to hadle such projects.

“It would be a good reference for us and allow us to respect the embargo," Skundric said. "It would also contribute to regional stability and cooperation."

The minister disclosed that the question about a loan to finance Serbia's role in the project has been discussed during his recent visit to China, but said no deal has been concluded.

Earlier in the month Bulgaria's Prime Minister Boyko Borisov said Serbia has expressed interest in a 5% stake in the project, which in his words would turn it into "a Balkan, European project."

The government has also reportedly unsuccessfully courted Romania as it angles for a new chief investor in its second nuclear power plant Belene to replace the German energy company RWE, which withdrew last autumn.

Bulgaria suspended the construction of its second nuclear power plant until it finds a new investor and funds to complete the project at Belene, on the Danube, 180 kilometres northeast of the capital Sofia.

The plant was originally to be built by Russian company Atomstroiexport for EUR 4 B. The firm had signed a contract with the previous, Socialist-led government, swept from power by Borisov's conservative GERB party swept in last year's July elections.

Borisov rejected a EUR 2 B offer made by Moscow for a stake in the plant and said Bulgaria will seek a European investor to finish its second nuclear plant.