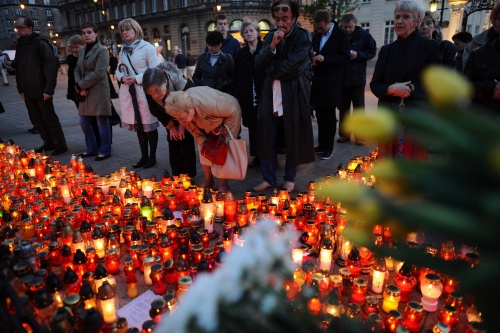 Warsaw residents light the candles outside the Presidential Palace on May 10 to commemorate one month since the air crash in Smolensk, Russia, which killed President Kaczynski, leading politicians and the entire military command. Photo by BGNES

The investigation in the plane crash that killed Polish President, Lech Kaczynski in April has ruled out any possibility of terrorist attack, explosion, or fire on board the aircraft.

The Inter-State Air Committee in charge of the probe gave a press conference in Moscow Wednesday, announcing the breaking news that non-crew members were present in the cockpit at the time of the crash.

"The voice of one of them has been identified exactly, the voice of the other, or the others, will require additional information from the Polish side," the head of the Inter-State Air Committee, Tatyana Anodina, said.

The investigation found that the pilot's cabin door was open as the plane tried to land and the voices of the crew were hard to identify, the Russian news agency ITAR-TASS reports.

Shortly after the crash, there was speculation that passengers may have put pressure on the crew to land in Smolensk

The investigation further confirmed crew were repeatedly warned about poor weather and the Tupolev-154 presidential plane was in full working order when it crashed.

The Smolensk airport is not certified as international, but is fully equipped to accept TU-154 planes and similar, the Committee also said.

Kaczynski, his wife Maria and 94 others, including many top defense officials and public figures, died on April 10 when their TU-154 government aircraft crashed en route to a war memorial service in Russia to commemorate the Polish victims of the 1940 Katyn massacre.