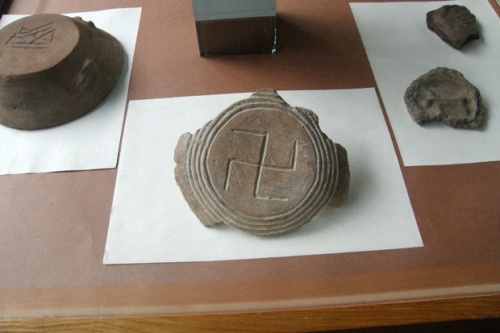 Swastika found in Bulgaria during archeology excavations is a century-old symbol and has nothing to do with Adolph Hitler and the Third Reich. Photo by Narcis Torbov for DarikNews

The Swastika is one of the oldest symbols found on Bulgarian soil during archeology excavations near the village of Altimir, in the northern Vratsa Region.

The precious find, along with 70 other objects, is on display at the Regional Museum in the city of Vratsa, Darik radio reports Wednesday.

The exhibit is titled “Gods, Symbols, and Ancient Signs” and will be opened for a month from now.

The symbol was also found in Bulgaria during the times of the Roman Empire on a fibula, and during the Middle Ages as a cross with bent arms. Swastika in Bulgaria can be seen in one of the oldest churches in the Black Sea town of Nessebar and at the “Saint Sofia” church.

The sign is a century-old symbol, dating from the birth of human civilization in Central Asia and North India, long before the time of Adolph Hitler and the Third Reich, archaeologists, authors of the exhibit, point out.